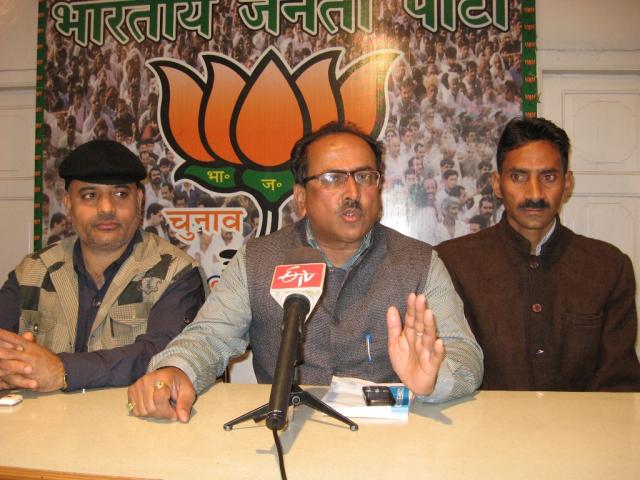 , December 14 (Scoop News) –Alleging that the successive governments for the last six decades had ruled on regional and communal lines, Bhartiya Janata Party today demanded special status to the Gaddis and Sippis community of .

‘’There is about 2.5 lakh population of Gaddis and Sippis living in different areas of Jammu Province including Basholi, Kathua, Udhampur, Rajouri and Poonch but despite falling under Scheduled Tribes category, they are not being treated at par with the Gujjars and Bakerwals of the state,’’ Dr. Nirmal Singh,  BJP National Executive Member, alongwith Party Vice-President Bali Bhagat and Gaddi & Sippi leader Sunil Singh  told reporters            in a press conference in Jammu today.

He said that Gaddi and Sippi tribes of J&K are socially, educationally and economically backward semi-nomadic transhument tribes inhabiting the far flung high altitudinal mountainous tracts of the state and besides agriculture, their economic activities revolve around the ardous and strenous avocation of rearing goats and sheep. These tribes exhibit seasonal migration from hills to plains and vice-versa in order to facilitate grazing of their flock and to avoid harsh weather conditions.

Singh said that the the Gaddi and Sippi tribes of J&K state are enjoying Scheduled Tribe status since August 20, 1991 but have been deprived of their rights of reservation under ST category and have been given step motherly treatment by all the successive state governments as a result of which they have been languished and dragged behind in all spheres of development, which is indeed very unfortunate. In Gujjar Advisory Board is giving all benefits to the members of a particualr section as they represent majority in the state whereas Gaddis and Sippis—being the members of minority community, have always been neglected and deprived of their rights. The governments is  ruling on communal and regional basis in the state, he alleged.

‘’The Gaddis and Sippis of Jammu Province are not being provided benefits under centrally sponsored schemes under Tribal Sub Plan, they do not have quota in professional colleges and universities,’’ the BJP leader rued.

‘’The government should treat the community at par with the other sections falling under ST category and should include Gaddi language in the Sixth Schedule of Jammu and Kashmir Constitution to give them the representation,’’ Mr Nirmal Singh said.