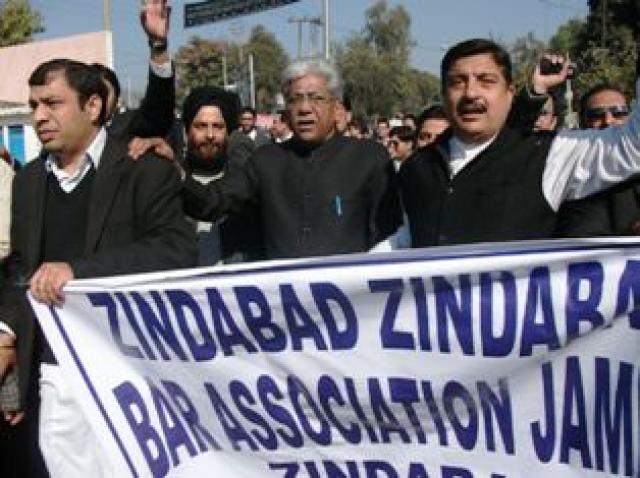 Jammu, December 16 (Scoop News) –Expressing solidarity with the agitating lawyers, BJP State President Shamsher Singh Manhas, on Friday, declared that the party has extended full support to December 20 bandh call given by Bar Association Jammu (BAJ). He said that the government has failed to understand the seriousness of the issue and take effective steps to ensure an early end to the inconvenience caused to the public due to ongoing agitation. In such a situation, it has become all the more important to exert pressure for which the co-operation of all the political, social, transport and trade organizations is must in order make this government wake up and shed its stand of prestige issue and exceed to the demands of BAJ.

Alleging that the NC-Congress coalition government has least concern towards the problems of the public and the same is clear from the attitude of the state government on the issues raised by agitating lawyers, Manhas said that the ongoing strike has brought all the works at halt as the state government has decided to shift registry from court to revenue department, which is totally unjustified. He said that It will only complicate the matters related to registration and common man will be the worst affected.

Manhas appealed all the people of , including transporters, traders, political and social organizations to strengthen the voice of BAJ by making December 20 Jammu Bandh successful..

Meanwhile  B.S.Slathia, President, Bar Association Jammu lambasted the State Govt. for keeping sinful silence on the issue of registration for which the Bar Association Jammu is spearheading an agitation for the last more than 20 days.  Slathia made it clear that the powers of registration of documents shall not be allowed to be taken away from the Judicial Officers come what may. The Bar Association has taken up the cause to protect the interests of public at large and the participation and support of every organization and member of the public establishes the fact that public has decided to take this mass movement to its logical end.

All the representatives of these organizations  appeal to the public at large for complete Bandh on that date to make the Govt. realise that it cannot sleep over the burning issue any further. They were unanimous in their view that the move of the Govt. in taking away the powers of registration from Judicial Officers shall only be helping the land-mafia and those powerful people who want to seek regularization of their illegal encroachments by vesting the registration powers with the Revenue/ Executive Officers.

Vikram Sharma, General Secretary, Bar Association Jammu thank the representative of Trade, Transport and Social Organizations for extending their support to the ongoing agitation and assured Bar Association’s resolve to fight for the interests of the common man till the end.