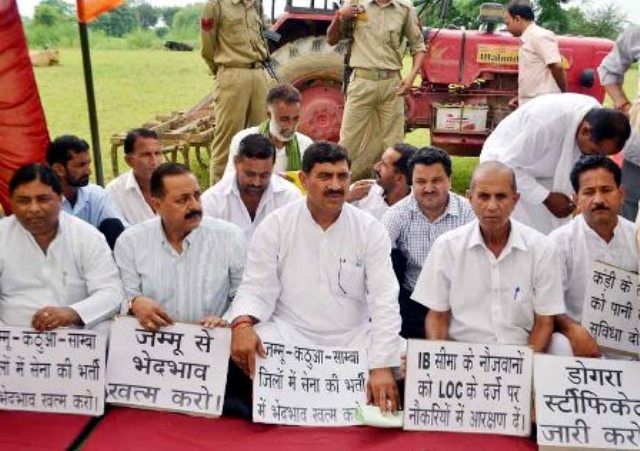 Jammu, September 03 (Scoop News)-At the conclusion of three day Dharna protest led by senior BJP leader Thakur Ranjit Singh in favour of demands of border area people at Chachwal near International Border falling in Hiranagar constituency in district Samba,about a thousand BJP workers courted arrest today led by State BJP President & MLA Jugal Kishore Sharma in presence of State General Secretary (Org) Ashok Koul.Those arrested included National Executive Member & State Chief Spokesperson Dr. Jitendra Singh,State General Secretary Rajiv Jasrotia, BJP Cells Incharge Sat Sharma (CA).State Spokesperson Sanjiv Sharma, District Samba President Kashmira Singh and several prominent party activists .
This dharna was held in support of the various demands of the International border people which include special economic package for these regions, removing discrimination in the recruitment in Central Security Forces viz-a-viz the residents of LoC, ensuring timely and round the clock availability of power and water both for irrigation and drinking purposes, payment of compensation on account of being denied access to their fields and lands beyond the border fencing.
Speaking on the occasion, Jugal Kishore Sharma said that the state government is bent upon to deny the benefits to these people which it routinely provides to the people of LoC areas on account of its sectarian bias. The withdrawal of issuance of Dogra Certificate, not lessening the merit requirement for recruitment in security forces, nor paying any compensation on account of losses suffered by the people of the International border regions by preventing them from going to their fields are prominent instances of the state government’s unconcern for the suffering of these people. On one hand the security forces do not allow these people to cross the border fencing so that they could attend their lands lying there and one the other hand no relief is given to them to ameliorate their hardship. He added that the BJP has been raising the issue of the problems of the border people from time to time and at the highest level in the country but the concerned authorities remain unmoved as the state government does not have any empathy for these people and does not raise their issues officially with the Central government.
Dr Jitendra Singh said Dogra Certificate envisaged by the Maharaja was based on scientific rationale of martial traits of border area community but by generalizing it ,the coalition govt had tried to play discriminatory politics.He also questioned the chief minister’s wisdom in recommending withdrawal of AFSPA from district Samba where Pakistan was digging underground tunnels and regular infiltration bids were carrying on uninterrupted.
Sat Sharma (CA) supported the demand of reservation for border area people in on the pattern of reservation for RBA or Pahari speaking people.He also suggested a sustained campaign for this demand.
Th. Ranjit Singh,while thanking the party leadership for its support to the border people and for highlighting their problems and suffering from time to time, said that BJP shall not rest till the problems of the border people are not solved. He added that BJP has been always in the forefront for solving the problems of the people. He reminded the public that it was BJP’s Doda Abhiyan of 1992-93 which led to the formation of VDCs in the militancy effected areas of Jammu region and it is these VDCs which have played a pivotal role in beating back the militants and ensuring safety of residents of these villages.
The participants of the dharna alongwith the BJP leaders afterwards went to cross the border fencing to attend the lands of these border people but were enroute taken into preventive custody by the local police in presence of the Executive Magistrate and as such prevented from visiting the fields of the local residents lying beyond border fencing.