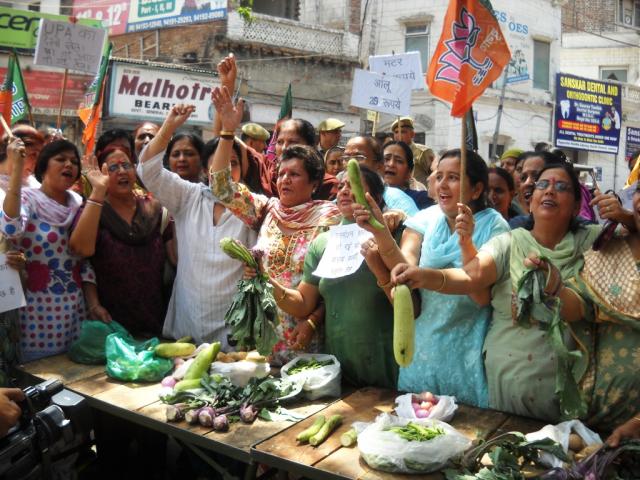 , May 29 (Scoop News) –   BJP Mahila Morcha staged a massive protest in against rising prices. Led by Mahila Morcha State President Sakina Bano, the protestors were raising slogans against state and central government that has made the life of every house hold in the country difficult.

Holding plycards in their hands they raised slogans against UPA government and Prime Minister, they put on display vegetable stall in Kachi Chawni chowk.

Addressing the rallyists, Sakina Bano said that government has failed on all accounts and no one is concerned about the plight of a poor common man who is facing it difficult to make his livelihood that has resulted in suicides. People in remote and far off areas too are suffering due to shortage and because of empty pockets, it has effected the coming generation those are not able to cope up with the new standards due to high rise in price index.

Sakina Bano said government could have efforts to make rupee stand and also could make cuts so that petroleum products could be like in other countries where petrol prices less than Rs 50 per litre but for the taxes the government levies on its products that common man has to suffer. She said with hike in the petroleum products entire price range varies as it effects every thing in transportation etc thus adding to the miseries of common people. Sakina Bano warned government and asked it to role back hike otherwise it will see people on roads.

Sakina Bano has announced that Mahila Morcha will whole heartedly participate in NDA’s Bharat Bandh call on May 31 against move of hiking petrol prices.