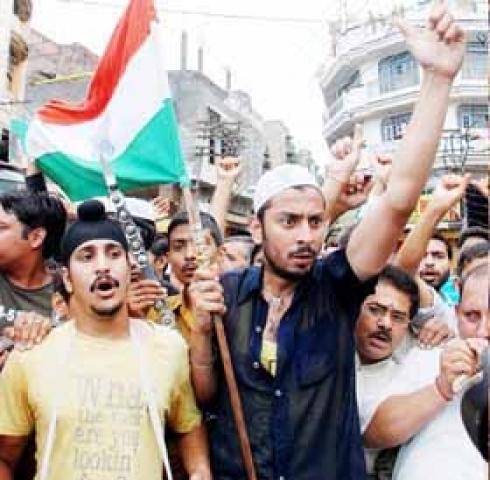 Jammu,July 23 (Scoop News) -State  BJP observed July 23 as ‘Swabhimaan Divas” by organizing a programme in the premises of Brahmin Sabha, Parade, Jammu, to  pay tributes to the martyrs of 2008 Amarnath Land agitation, and the party leaders and activists remembered their supreme sacrifices.

BJP State President Shamsher Singh Manhas, Leader of Legislators Party Prof. Chaman Lal Gupta and other senior leaders also honoured the family members of these martyrs by presenting them shawls and momentos as a token of respect.

While paying floral homage to all who laid down their precious lives during the 63 -day long agitation in ,  Shamsher Singh Manhas said that these great nationalist persons really deserve honour as they got martyrdom for a noble cause. The 2008 agitation brought all the people of province under one umbrella to agitate against the  repeated  discrimination with in all matters and at all levels. It was the out burst of the anger of Jammuites against the successive government which had taken for granted and always concentrated towards development of only. He also criticized  the state government of discriminating with Jammu by not keeping its promise of compensating traders, transporters, industrialists, farmers and others, who suffered losses during the agitation to the tune of 15,000 crores as it is Kashmir-centric in its approach.

Prof. Chaman Lal Gupta, on the occasion, said that it was a historic agitation which send clear message that the people of will not tolerate any discrimination and that they can  achieve what they deserve. He said the people of Jammu has been consistently agitating  since 1947 on different  issues which are directly related to the national cause and full integration of the state with the rest of the country. Be it  Praja Parishad, Jana Sangh or present Bharatiya Janata Party, we have always stood with the nationalist people in the state and even sacrificed our great leaders while fighting against discriminatory policies and such provisions which have encouraged the anti-national elements. He said the party activists should take pledge on this day to expose all such people who have become pupets into the hands of Kashmiri leaders and compromised on the interests of for their personal benefits.

The party also honoured five such persons who got severe injuries and later became disabled. They are Pawan Singh, Sansar Chand, Vijay Kumar, Ravi Kumar and one  Khullar.

State General Secretary Sat Sharma conducted the proceedings of this programme, which was attended by over five hundreds party activists drawn from different areas of Jammu districts besides representatives from some social organizations.