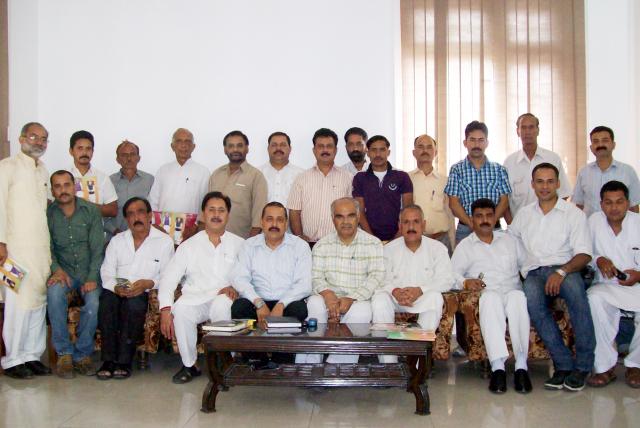 Jammu,June 08 (Scoop News) – Outright rejection of recently released Interlocutors’ report, resentment over unscheduled power cuts in Katra and Reasi towns and omission of certain important spots of Reasi district from the state coalition government’s notification mentioning important tourist spots of Jammu and Kashmir were among the highlights of the meeting that BJP district office bearers held with the party’s senior state leaders at Katra on Friday.

Manhas informed the party workers about “Jail Bharo” programme to be held at all district levels including Reasi on June 22. He also appealed to them to district liberally for the construction of party’s new modern office complex at Trikuta Nagar, .

Ashok Kaul stressed on membership drive which the party plans to undertake from June 15 and described it as a “Sangathan Parv” (organizational festival) because it will not only offers an  opportunity to enrol new members into the party but also facilitate a mass contact programme at grass-root level.

Ashok Kaul also explained the importance of protest programmes from 23 June to 6 July, 2012 which will focus on the Interlocutors Report which the party has already rejected. He also announced foundation stone laying of BJP’s new office complex on July 06, 2012.

Dr. Jitendra Singh presented a detailed resume of the recently released Interlocutors’ report and said that a report which advocates Sader-e-Riyasat and Wazir-e-Azam in violation of the party’s crusade for “Ek Nishan, Ek Pradhan, Ek Vidhan” can never be accepted by in the BJP whose founding father Dr. Shyama Prasad Mukherjee had laid down his life for the same cause. For us to this report amounts to sacrilege, he said.

Dr. Jitendra Singh gave a brief account of six important points included in party’s resolution presented at the BJP National Executive Meet in Mumbai on May 24. These included party’s concern over lack of focus on terrorism afflicting the Jammu & Kashmir for the last 20 years, inadequate address of the problem of displaced Kashmiri Pandits, minority Sikhs and refugees, suggestion to term Article-370 “special”, suggestion to constitute a committee to review provisions of Indian constitution extended to the state after 1953 and using nomenclature of Pak Administer Jammu- Kashmir (PAJK) for Pok notwithstanding 1994 resolution of the Indian parliament.