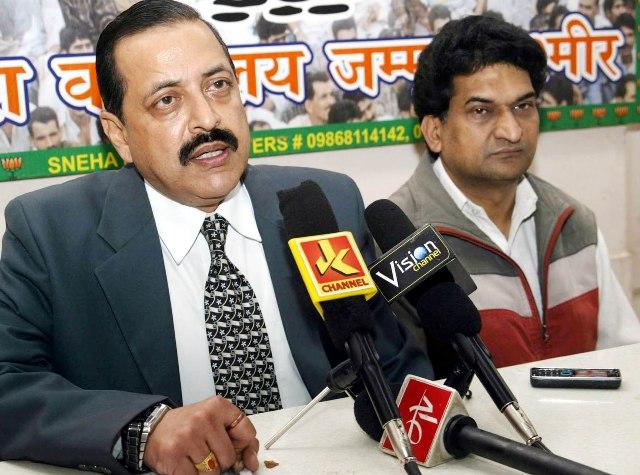 Jammu, March 17 (Scoop News) –BJP State Chief Spokesperson & National Executive Member Dr. Jitendra Singh has expressed serious objection to the reported contents in the final report ready for submission to Union Home Ministry  by Dileep Padgaonkar-led team of “Interlocutors” and has issued  stern  warning on behalf of the Central and State leadership of BJP that the party will launch a mass movement across the country to  expose this consipiracy and to oppose  any such proposal which is Kashmir-centric or ignores the interests of Jammu and Ladakh or which tends to weaken the Jammu and Kashmir State’s relationship with the rest of India either physically or psychologically.

Addressing a press conference in today Dr. Jitendra Singh alleged that the Interlocutors had followed a baised approach right from the beginning and during each of their visits to the state, they had deliberately avoided establishing contact with the BJP leadership.

Narrating chronological sequence of events, he said that during their first visit  to state they did not seek meeting with BJP leadership while during their second trip, they visited the BJP headquarters at Jammu on 17 January and apologized for their inability for not having met during earlier visit but explained that this had happened due to a “goofe-up” on the part of local administration. During  the one and half hour meeting that followed, the BJP leadership placed before the Interlocutors the main issues of party concern which included “Delimitation of election constituencies”, discrimination against Jammu and Ladakh, implementation of 73rd & 74th amendments before holding Panchayat election, displaced Kashmiri community as well as PoK and West Pakistan refugees, unemployment among youth etc.

According to Dr. Singh, the head of Interlocutors team Dileep Padgaonkar told the BJP leaders that the Interlocutors needed time to further study these issues and promised that they would get back in next 20 to 25 days. But, Dr. Singh alleged, the Interlocutors deliberately avoided any future contact with BJP and in utter disregard of the courtesy to be shown to a national party, during their last visit to Jammu about two weeks backs on the last day of their  stay in Jammu, one of their representatives called up the State BJP President to fix up a meeting within three hours to which the State President politely expressed his inability because it was difficult to locate and bring together the party office bearers and core group members at such a short notice.

Dr. Singh alleged that right from beginning the Interlocutors team had ignored the BJP view point and warned that BJP will launch a countrywide campaign and the entire nation will rise in one go if on the advice of Interlocutors,  Govt. of India betrays a tendency to make further concessions to appease separatists or oblige the State’s ruling coalition partners.

“We look at ‘Autonomy’, ‘Self-Rule’, ‘Achievable Azadi’, ‘Azadi’ as part of the same secessionist spectrum,” said Dr. Singh and added that the only Kashmir roadmap proposed by BJP is that of full and final integration of Jammu and Kashmir with the Union of India and will not accept anything less than this. Dr. Singh further informed that from April 06,  the “Sthapna Divas” of BJP, the party will launch a countrywide campaign against host of issues like corruption and price rise, and added that mischief of Interlocutors report vis-a-vis will also be taken up.

Filed under: Politics, World
Share Tweet Pin G Plus Email
previous article: Rise in gas outputs and shares shall rake in profits for Reliance Industries
next article: Mukesh Ambani, the youngest and only board member in the Bank of America