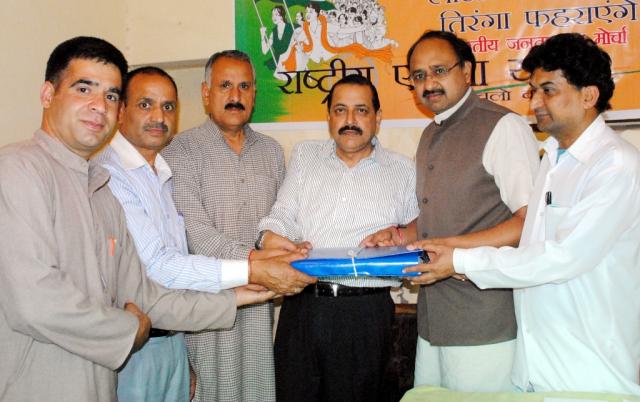 Jammu, March 24 (Scoop News) –    BJP will take up the issue of Jammu and Kashmir refugees at national level. This was stated here today by the party’s National Convenor of Human Rights Cell, Sudhir Aggarwal who arrived here  for a one day fact-finding tour and after paying a courtesy call to the BJP State President Shamsher Singh Manhas at party hqrs. , he got closeted for over three hours with  State Chief Spokesperson and National Executive Member Dr. Jitendra Singh, who presented a detailed resume of origin, background and present status of different sections of refugees including the West Pakistan refugees, the PoK refugees,  the refugees of 1965 and 1971 and the internally displaced victims of terrorism.

While highly appreciating the hard work and effort put in by Dr. Jitendra Singh and his team in preparing a comprehensive report on the issue, Aggarwal said that the BJP National President Nitin Gadkari was taking keen personal interest in the problem of refugees and wanted a close follow up of it.

Aggarwal further stated that he will report back in Delhi to national office bearers of the party  including the National President Nitin Gadkari after which the National Human Rights Cell of the party will work on different modalities of follow-up, including litigation in the Supreme Court and holding of awareness seminars as well as  protest rallies in the national capital.

Aggarwal said it was unfortunate that while some of the displaced persons from West Pakistan like Dr. Manmohan Singh and Inder Kumar Gujral,  who had settled in other parts of the country,  rose to become Prime  Ministers, those who had chosen Jammu and Kashmir as their home were still waiting for their voting rights. More unfortunate has been the attitude of the present UPA government, whose Prime Minister Dr. Manmohan Singh himself  admitted during his Jammu visit that being himself a refugee, he understands the problems of the refugees in Jammu and Kashmir.