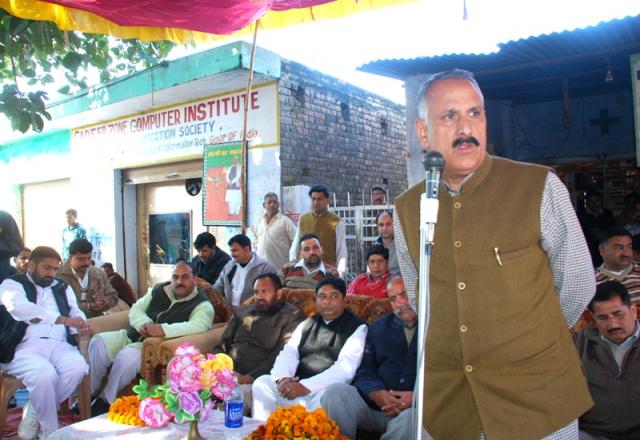 Jammu,February 15 (Scoop News) – BJP State President Shamsher Singh Manhas today said that the the BJP treats Jammu and Kashmir as crown of mother India and any attempt to take this state away will be dealt with strongly.

Manhas while addressing a public rally at Pargwal in Akhnoor sector said that the BJP has all along worked for strengthening the national forces in the state and defeating the nefarious designs of anti-national elements. He said that we all need to take pledge to work unitedly to  work for ensuring that those indulging in seditious activities are brought to book.

He said that with each passing year the number of unemployed youth in the state is going up and at present there are more than 6 lakh such youth who are sitting idle after attaining higher educations. It is due to the lack of job avenues in the state. While the Industries have flourished in other parts of the country, here in J&K it has not been able to growup due to Article-370. This Article bars any one from outside the state to purchase land, setup industry or big manufacturing plants, which can provide employment to thousands of youth at a time. He said that the time has come when the ruling NC-Congress coalition should realize the need to get rid of this article and immediately work towards its abrogation.

Criticising the government for giving step motherly treatment to the people who do not have any association with the Congress or NC, Manhas said that pick and choose policy is being adopted by the elected representative of the area while recommending developmental works and extending benefits of welfare schemes. He also took the officials of different departments to task for becoming tools into the hands of Congress leaders and warned them to discharge their duties in an impartial manner.

State General Secretary Sat Sharma  on this occasion, said that the border people in Jammu province are facing a number of problems but still they do not compromise and stand like a rock whenever there is a threat to the unity and integrity of the country. For such an approach of these people, we salute them and appeal the people living in other parts of the state to take lesson from them.