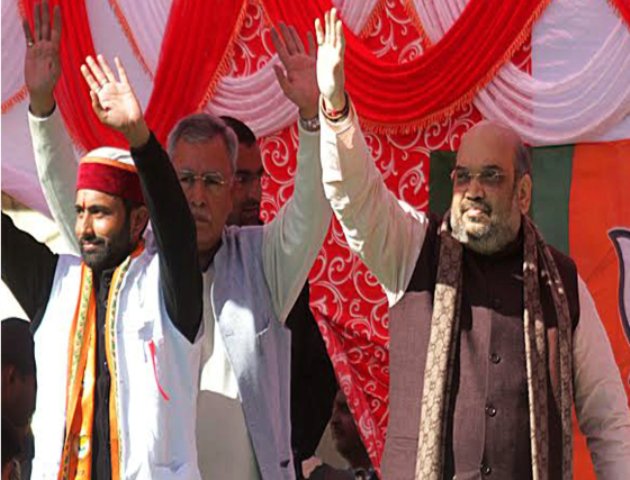 Amit Shah who is in state on 2-day tour, addressed public rallies in Ramban and Banihal assembly constituencies to seek votes in favour of party candidates Neelam Langeh and Shoukat Deng respectively. He was accompanied by BJP State Spokesperson & Election Campaign Committee Member Farooq Khan.
Amit Shah, while addressing in these constituencies, said that after thirty years the country has a government with full majority and it is due to the effect of Narendra Modi wave which brought a total change in the minds of voters across the county as they found a leader who could be trusted and who had proved his worth in Gujarat as Chief Minister. The people wanted a change and they did so by using the power of their votes. This wave is not going to stop and it is visible in Jammu and Kashmir also, where the people have suffered a lot during the past over six decades and want to give chance to BJP.
Amit Shah said that after independence two families mostly ruled the state and the time have come when the people themselves have decided to teach these families and their parties’ lesson and it is going to be reality after the elections. He said although J&K remained backward, under developed, did not have adequate basic amenities, healthcare facilities or proper road and other means of communication but it achieved the distinction of becoming second most corrupt state in the country and the credit goes to NC, Congress and PDP. BJP will work towards taking J&K at top ranking in development and ending corruption, he said.
Praising the Narendra Modi –led NDA government for bringing down petrol prices 12 times during last five months, Shah said the BJP is committed to check price rise, provide good governance and concentrate on mitigating the sufferings of weaker sections, farmers, refugees, border people besides exploring job avenues for unemployed educated youth and ending discrimination with Jammu and Ladakh.
The BJP Chief also shared his old memories with the people while recalling 1990 ABVP’s Chalo Kashmir March, when he along with thousands of activists was arrested at Ramban.
Farooq Khan, in his address, explained as to why BJP deserve votes of the people stating that comparison between the past record of Congress, NC and PDP with the publically recognized and accepted BJP’s slogan of Sabka Saath Sabka Vikaas, it is witnessed that faith of the masses towards BJP in entire length and breadth of the country has developed more stronger than other parties and J&K has not remained untouched. He said that the people should not fall prey to false promises and assurances of the parties which have betrayed them again and again and should vote for BJP otherwise they will be facing same problems and miseries for next six years.
Besides BJP candidates, BJP State Spokesperson Suresh Ajay Magotra, Local Senior Leaders Ramesh Sharma and Puran Chand were also present in these rallies.