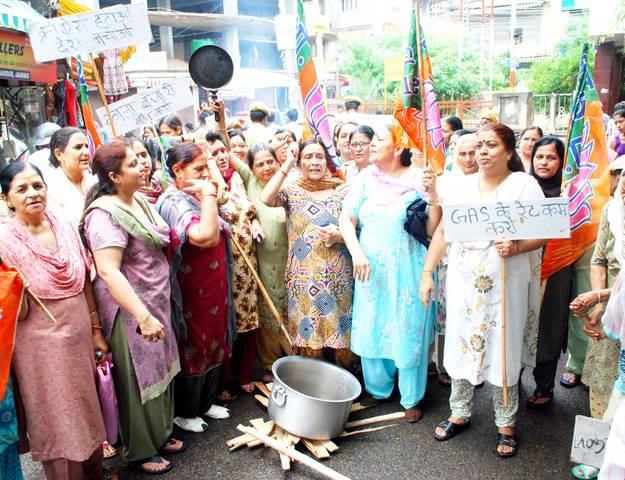 : To
register resentment and anger over hike in the prices of LPG cylinder, kerosene
and diesel, activists of BJP and its Mahila Morcha held massive protest
demonstrations at Purani Mandi, Ambphalla and Gole Market areas of city. They were
carrying empty utensils, empty cylinders and wooden sticks to cook food.

Speaking at these places, BJP and Mahila Morcha leaders said
that the recent rise in the prices of gas cylinder, diesel and kerosene oil has
added to the problems of a common citizen. Already the prices of essential items
have gone up manifold and this hike will prove to be threat to the survival of
a common man in the country. They said that the Congress-led UPA has least
concern for a common citizen and it is worried as to how to benefit a handful
of people. They said that the innocent people are misled on the slogans of
Congress ka haath, gareeb ke saath and on ground every such decision is taken
which is anti-poor. They declared that the protest demonstrations will be
intensified to expose the real face of the Congress.