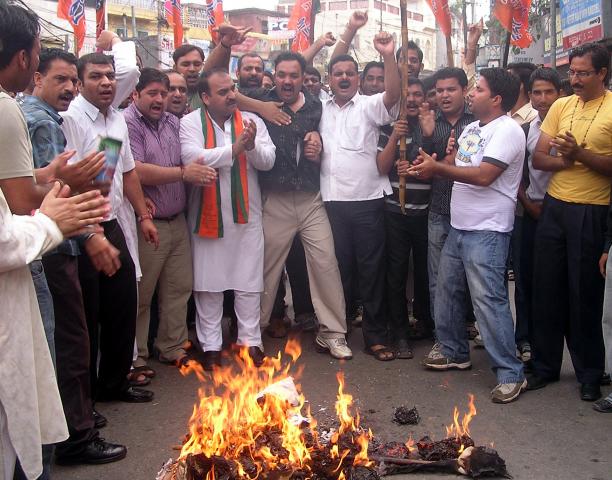 , August 23 (Scoop News) – BJYM activists today held demonstration in protest against the involvement of the present and former ministers of coalition government arranging impersonators for their children in MBBS /BDS selection examination conducted in on Friday

Speaking on the occasion, the State BJYM chief said that the corruption has reach to its zenith with ministers and bureaucrats indulging in whole-sale loot in the state. He said that on pretext of developmental activities, the minister and officers were emptying the public exchequer with no development being carried out. He further added that the conduct of these ministers whose wards were being impersonated reveals total lack of rectitude and the contempt the present day ministers have for bonafide competition and fair play for the hardworking meritorious students.

It is because of un-accountability, that all leaders including the senior ones of the coalition government were indulging brazenly in mal-practices, he said, adding that the corruption has percolated to the lowest rungs in the administration as a result of which people in the state are in dire straits and got alienated.

Demanding arrest of public works department minister for his involvement in impersonation for his daughter, Sharma also said that a case be register against former minister as well. The BJYM leader also demanded a thorough enquiry by impartial investigating agencies, such as CBI, to expose the people behind this conspiracy and expose all the facts and culprits before the public. This will ensure that in future no such fraud is attempted against the hardworking and meritorious students.