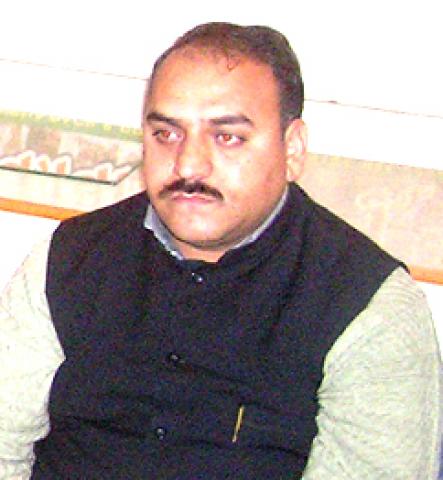 Jammu, May 26 (Scoop News) –   Bharatiya Janata Yuva Morcha (BJYM) will not allow Shri Amarnath Shrine Board (SASB) to interfere in the religious affairs of crores of people across the country by hurting the sentiments of devotees of Baba Amarnath. This was stated by Yuva Morcha State President Munish Sharma while addressing hundreds of morcha activists who were protesting outside the Raj Bhawan against the decision of the SASB to curtail the annual holy yatra of Shri Amarnath by 15 days. The party activists were carrying BJP flags and placards with slogarns against decision of Governor-led Board.

Munish Sharma said that it is indeed unfortunate that the religious sentiments of Hindus are hurt by taking a decision against the religious rituals aimed at bringing down the yatra by fifteen days. He said it is not for the first time that unilateral decisions are being taken to create hurdles in the smooth conduct of yatra. The Board had been constituted with a sole motive to take decisions aimed at smooth conduct of yatra but SASB has crossed its limits and indulged in making changes in the commencement dates which have invited wide spread resentment and the coming days may see more protests and demonstrations if the Board do not withdraw its anti-Hindu decision.

Extending full support to Baba Amarnath Yatri Niyas, Munish Sharma declared that the Yuva Morcha will  further intensify the campaign against the decision of SASB and appealed other social, political and religions organization to come under the Umbrella of  Nyas and display unity over this vital issue.