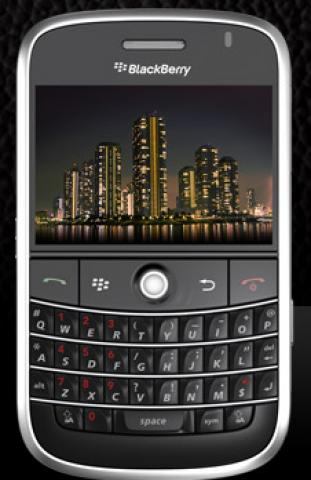 Call it The Bold & the Beautiful.  Today Blackberry holding company Research in Motion (RIM) announced the Blackberry Bold, its sleekest, strongest most Apple-esque smartphone ever.  If looks could kill, Apple’s iPhone might be a likely victim.

And clearly the iPhone is in RIM’s sights. The new Blackberry Bold has the sharpest visual display ever, a "desktop-style" web browsing experience and support for streaming video.  Mentioned first in the press release, these features are all hallmarks of the iPhone.

The phone itself looks much more like the glossy iPhone, as shown on its promotional website. The Blackberry Bold– or 9000– is the prettiest yet.

The Boy Genius Report listed these as highlights:

TechCrunch noted that there is no touchscreen— still the signature trackball– but listed these features: