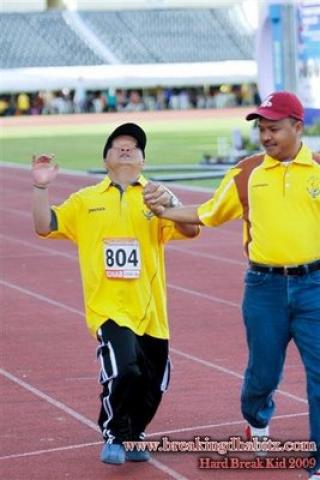 AnakBrunei wrote a heart warming post on ensuring that these special citizens are given opportunity to participate in sport activities and to compete in global events. The intention is not only to ensure participation but to be part of a global community.

People with an intellectual disability are often misunderstood or ignored, yet when they are given a fair chance they can, and do, participate as valuable members of the community. For this belief, Special Olympics Brunei Darussalam endeavors to provide sport for all people with an intellectual disability, regardless of their skill level. Through sport, Special Olympics Brunei Darussalam  (SOBD) aims to give our special athletes the opportunity to get fit, develop skills, make friends and be part of a community.

Let me win, But if I cannot win, Let me be brave at the attempt…”

It was a coincidence that some bloggers got together over dinner and decided to do a charity event to raise funds for SOBD.  Within a few days after discussions over emails, invitations were made to to get bloggers and non-bloggers alike for the first Ultimate Foodie Bloggers’ Challenge,  held on 26th April 2009. Support was also provided by Blogging Nation. As reported in one of the local papers:

“In an interview with Senor Pablo, a representative from the organising committee, he said, “The competition is one of the meaningful ways to contribute to the society. As part of bloggers community, food is a common theme that binds people, so I thought why not organise a foodie challenge, which invites not only food bloggers but also food enthusiasts.

“The event was organised by well-known local bloggers in Brunei with support from food contributors. Bloggers and contributors had contributed 49 good recipes and the recipes will be collected and compiled into a book made available for everyone. The recipe book will be sold during the Special Olympic Brunei on May 3, and all the proceeds will go to charity. — Courtesy of Borneo Bulletin”

Much work took place within a week to get the book ready for the Special Olympics Bazaar on 3rd May 2009. Efforts in producing the recipe book were made through recipe contributions from local bloggers and others, with editing, lay-out design and cover design done by local bloggers. Since we didn’t have any funds to pay for the printing cost, we managed to get a local printer to sponsor the cost of producing the book.

The bazaar was the event to start the sales of the Recipe book. For the whole day, we managed to sell 100 copies of the book. With the price of $10 per book and all 100 percent sales donated, we raised B$1,000, which was handed over to the SOBD Committee on the same day.

Turquoise and Roses got a booth set up at the bazaar with special emphasis on selling the recipe book.

“We sold exactly 100 copies of the Foodie Bloggers’ Recipe Book with the help of Pablo, Muaz, and our wonderful volunteers!!! Thanks boys and girls!…I am very glad that the spirit of voluntarism and activism is alive in our youth. They make volunteering seem cool! Keep it up!”

AnakBrunei reported on the bazaar, whereby a special copy of the My favourite Recipe book, signed by Her Royal Highness Princess Azemah was auctioned, to raise more funds for the SOBD.

“There’s one limited edition “My Recipe Book” which was personally signed by Her Royal Highness ‘Azemah Ni’matul Bolkiah during the Charity Bazaar and this signed recipe book will be going for auction and the starting bid will be BND50.00. Oh yeah, the special book will be framed with the picture of HRH signing the book. So that’s a pretty good buy indeed. The deadline will be on Saturday midnight.

A special thanks to Her Royal Highness Princess ‘Azemah Ni’matul Bolkiah for signing the Recipe Book as well as giving the consent for the Recipe Book to be auction for the Special Olympics Brunei Fundraiser campaign. A big thanks also to those involved in the making the auction possible and Mr. Reeds has kindly sponsored the frame for the limited edition book. A shout also for Pilihan FM and Kristal FM for plugging the auction.

As of now, the 500 copies of the books have been sold out with less than a week. Now that I have say is a great achievement and it’s comparable to achieving a platinum status on CD sales. So what’s next? Bloggers’ Singles compilation album? *lol* Well, you’ll never know but there are just thousand of ideas that we can come up with. All I can say is if we bloggers do something, it always start with a BANG.”

The progress of the auction

Emmagoodegg bought the book and in her post, listed out the recipe contributors and  wrote:

“I feel most guilty at not being able to partake, but hopefully there’ll be a next time. I’ve read that the recipe book gathered some vitriolic discussion over on RA’s tagboard over some missing ingredients in some recipes, well-intentioned people simply using the book for fame and glory, the usual defeatist comments that seems all too common in our country. All I can say is My Favourite Recipes is a commendable and worthwhile effort and that at least these folks stepped up to the plate and gave their time for charity.”

Brunei Lifestyle reported on the outcome of the auction bid:

“The successful bidder of the My favourite recipe limited edition signed by HRH Princess ‘Azemah Ni’matul Bolkiah is Sheikh Khalid of the Arab families. Sheikh Khalid placed the highest bid of $5,586 almost 40 minutes before the stroke of midnight last Saturday night, the deadline to bid, to get a copy of the edition.

What I can say about the whole project is that the book has managed to collect $10,586 with all of its 500 copies sold in two weeks time. Thats an amazing feat. Bravo! Bravo! bravo! and take a bow Pablo! Also Rano…oh they both end with an ‘o’. Whats next Senor? To Alin, the Kurapak man for designing the front cover . Thank you too to the Arab families for your kind gesture. May God repay you and family for your kindness. Amin. I myself, look forward to contribute in the near future.”

The recipe book project earned $10,586. The funds collected will be passed to the Brunei Special Olympic Team. The project has a quick turn-over: from conceptualizing the project, to the production and selling of all 500 copies within a month. As part of the organising team, I feel honored to be part of this charity drive, an effort organised by local bloggers with no fund to start with. This also shows that bloggers can contribute and support local causes. I also hope that this will be a start of various initiatives organised by bloggers to support local charity and to contribute their spare time on good causes. On behalf of the  event organisers, we now wish the Brunei Special Olympic Team much success in their training and participation in the 2011 World Event.

Filed under: Media & Tech, World
Share Tweet Pin G Plus Email
previous article: Cyclone Nargis in Myanmar: A Year After
next article: Angola: “Every city has its history, and ours is no different”