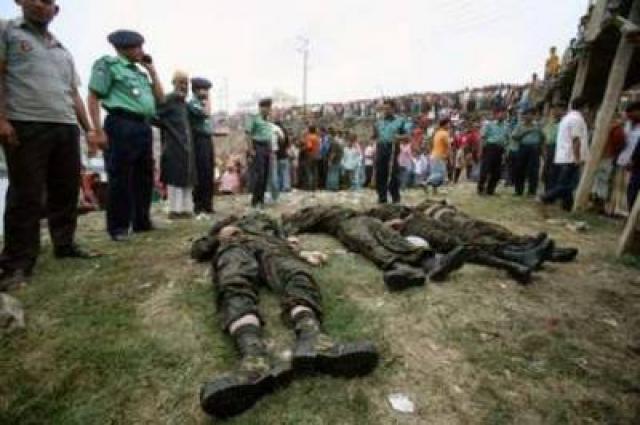 At least 72 army officers are still missing since the bloody mutiny by rebel BDR soldiers began on Feb. 25. Yesterday officials found another 3 mass grave & 63 bodies were found, indeed 47 of them have been identified. Fifty-three members of BDR’s 14th battalion in Srimangal who joined the BDR Week programmes at the headquarters, are still missing.

A senior army officer said in a statement Friday night that trial of those who killed scores of army officers in the two-day BDR mutiny will be fast-tracked. Local government minister Syed Ashraful Islam said, “"A full investigation into the violent killings will be carried out. The government has some evidence which point to The Involvement of People Outside Of the BDR,"

A senior army officer said in a statement that “Government announcement the dead would be buried with full state honor and that the families provided with "all facilities". He also mentions that the two-day mutiny had marked ‘s image internationally. The government and the army have launched separate enquiries and the perpetrators will be punished on their finds.

United Nations Secretary-General Ban Ki-moon has condemned the "brutal acts of violence," during the two-day mutiny by members of the Bangladesh Rifles.

Necessary steps are being taken to restore discipline and morale among the rebel-hit soldiers of Bangladesh Rifles, the newly appointed director general Brig Gen Moinul Hossain said. He also assured the public that all national borders were secure in the wake of mutiny by rebel border guards at their headquarters.

The army officers, who were engaged in BDR headquarters and on vacation, temporary duty or other duty outside there prior to the mutiny, have been asked to report to their nearby cantonments or station headquarters, an ISPR press release said Friday.

A bloody two-day mutiny by mutiny border guards that began Wednesday left a death toll of 77, mostly officers, as more bodies were unearthed on Saturday. More than 70 officers were still reported ‘missing’.