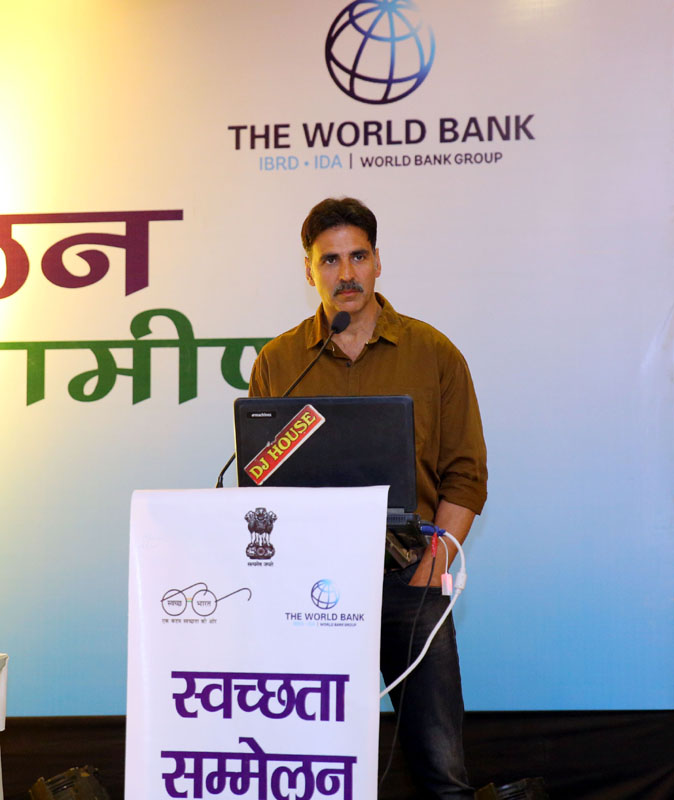 The Iconic actor, Mr. Akshay Kumar addressing the Swachh Bharat Champions, at a 2-day ‘Swachhata Sammelan’, in Mathura on December 22, 2016.

Mathura (PIB-GR-TYP-BIN): Iconic actor, Mr. Akshay Kumar, addressed Swachh Bharat Champion Collectors and Sarpanches at a 2-day ‘Swachhta Sammelan’ organized in Mathura on Dec 22. Speaking at the sammelan, he said that when he received an invitation to address Swachh Bharat Champions, he agreed to do it without a moment’s hesitation. He saluted the efforts being made by all government officials and grass root workers engaged in rural sanitation to contribute to our nation’s march on the road to an Open Defecation Free (ODF) India by 2019, as per the Prime Minister Narendra Modi’s vision for Swachh Bharat Mission.

Mr Kumar is currently shooting a commercial movie in Mathura around the theme of rural sanitation and toilets for the health of the family and safety and dignity of women. He spoke about the need to deliver social messages through mass entertainers to make a deeper impact. He said that it is a shame that, in the age when India has successfully completed a mission to Mars, we still have open defecation prevalent in our country.

He said that, like the Prime Minister has envisioned, this needs to be made a janaandolan, and that communities must themselves lead the way and influence people in their village who own mobile phones but not toilets to make their family’s health and safety a greater priority. Mr. Kumar also interacted with the Swachh Bharat functionaries present and listened to their experiences from the field, the challenges they face, and how they go about solving these challenges.

Another session conducted with the Swachh Bharat Champions during the 2-day Swachhta Sammelan, organized in Mathura, was a leadership session conducted by renowned management guru, Mr. Shiv Khera. Mr. Khera spoke to the Champions about the importance of qualities such as responsibility, ownership, motivating teams and having a positive mental attitude.

The Sammelan ended with a field visit to Mudesi gram panchayat in Mathura, where the Champions from across the country observed ongoing toilet construction activities in the village, and discussed toilet technologies suitable for various topographies in the country.

The Sammelan was led by the Secretary, Ministry of Drinking Water and Sanitation, Mr. Parameswaran Iyer, who said that he was encouraged by the response shown by the Champions to the sessions conducted over the two days, and that the Ministry will continue to organize such conventions across the nation to motivate Swachh Bharat Champions.