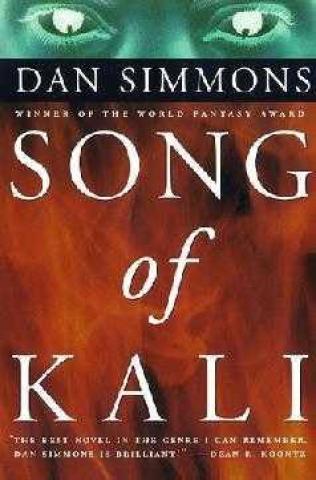 Song of Kali is Dan Simmons’ first novel and was published in 1985. It is set in Kolkata in 1977 with the Emergency as a backdrop. It has been categorized as a horror novel or a work of fantasy in most American reviews and has even been awarded the World Fantasy Award. However, the Indian reader will recognize the work for was it truly is – a work of crime fiction with the Tantric sect of Kapalikas as the centrepiece and the accompanying Tantric rites contributing to the eerie atmosphere and a supernatural element that contributes to the “horror”.

For those who like this genre of work, this is a good read. Simmons is able to capture the atmosphere of Calcutta of the 70s. Those familiar with the city in those times will recollect well the author’s description of the endless power cuts, dead telephone lines, communist posters all over the city and the general sense of decay that made Rajiv Gandhi call it a “dying city”. Considering that Dan Simmons is said to have spent just two days in Calcutta when he wrote the book, I must say that he conveys the essence of the city as it was in the 70s very well.

The chief character of the book is an American Poet and journalist Robert Luczac who is married to Amrita, an Indian born mathematician. He travels to Calcutta with her and their infant daughter to collect a work by a noted Indian and Calcutta based poet, M. Das for publication in Harper’s Magazine as well as a small literary publication called “Voices” edited by his mentor Abraham Bronstein. Das has been missing for some years and is presumed dead but recently rumors have begun circulating of a new and epic work by the poet which Harper’s would like to use. But Bronstein who has been a journalist before and has been to Calcutta briefly decades before warns Luczac not to go without citing any specific reasons – setting the foreboding air of suspense of what might happen if he does go.

Things start going wrong from the time Luczac and his wife land in Calcutta. The man who was supposed to meet them is not there, but there is some one else and he presents convincing credentials and so they allow him to guide him to their hotel – The Oberoi Grand. From there the story proceeds at a very rapid pace till Luczac finds himself sucked into the shadowy world of the Kali worshipping Kapalika community and their shadowy rituals which include their initiation ceremonies which include human sacrifices. Dan Simmons recreates the ambiance by inserting recitations from the Sathpatha Brahmana, an almanac on sacrificial rituals, the Gayatri Mantra as well as tantric verses like:

in creating a mystical atmosphere in which the super natural occurrences in the book occur.

In the last chapter, Simmons departs from the usual style of horror novels as he gets Luzac to attempts some kind of an explanation for what he has seen and experienced. Luzac’s summary is “I think that there are black holes in reality. Black Holes in the human spirit. And actual places where, because of density or misery or sheer human perversity, the fabric of things just comes apart and that black core in us swallows all the rest”. Maybe Luzac is right. But meanwhile, the book is worth a read not so much for its horror element but for the very vivid way in which Calcutta of the late Seventies when the Left Front government had just come to power.

The manner in which the city is described is vividly accurate and though the fact that the description comes from an American author makes it that much difficult to swallow, few who are familiar with Calcutta of those days will debate its accuracy.

Filed under: Lifestyle, Music & Film
Share Tweet Pin G Plus Email
previous article: Whiite Mughals – A Blending of Cultures
next article: “Should I Move My 401K To A Money Market?”