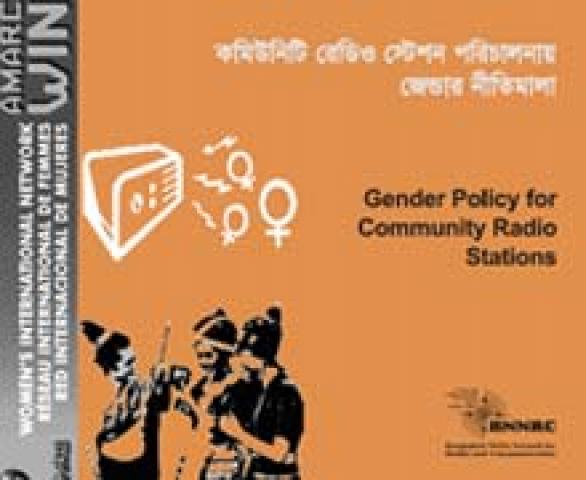 BNNRC has published an booklet on Gender Policy for Community Radio Stations.
Community Radio is playing very significant role in the countries of South Asia responding to other regions of the world. Recently Information Ministry of the People’s Republic of Bangladesh formulated Community Radio Installation, Broadcast and Operation Policy 2008 and we would thank the Government for this policy.
Bangladesh NGOs Network for Radio and Communication (BNNRC), you know, is promoting the advocacy with the government in relation to community radio with other organizations since its emergence.
State is still a sweeping entity to the poor people in Bangladesh, where to reach is tiresome and dialogue is beyond imagination. At the same time, even their own community neglects the voice of the poor people. In this circumstance, promoting, empowering and extension of community radio can play significant role in alleviating poverty through creating easy access of the poor to the information highway.
The third goal of the Millennium Development Goals (MDGs) is gender equity and women empowerment. Considering the ownership and access to the Information and Communication Technology (ICT) as an instance, it appears transparent that gender discrimination in technological use is extensively wide in Bangladesh.
Gender discrimination is much wider in broadcasting sector. As community radio is going to run in the country, if the gender issue is considered with much emphasis since the beginning, it will be possible to ensure gender equality at least in the administration, management, program and financial planning of community radio operation.
One of the objectives of publishing the very Gender Policy in Community Radio Stations prepared by World Association of Community Radio Broadcasters (AMARC) – Women International Network (WIN) Asia Pacific in Bangla is to create massive awareness of the government, non-government and development initiators on eliminating gender discrimination in community radio stations.
We hope the community radio initiators will follow the instruction stated in the Gender Policy in Community Radio Stations and play marking role in ensuring gender equity in the broadcast sector in Bangladesh. Be Community Radio one of the development tools for the voiceless.