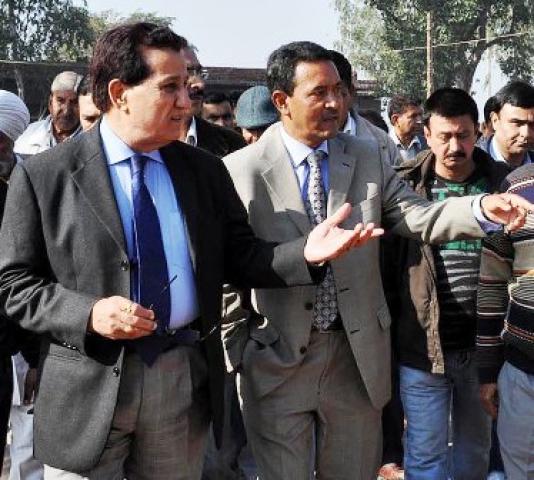 Jammu, December 21 (Scoop News) –The Minister for Tourism and Culture,  Nawang Rigzin Jora and Minister for Medical and Technical Education,  R. S. Chib today inspected under execution tourism infrastructure in Suchetgarh, being created to promote border tourism in the state.

The development of tourism infrastructure at the frontier area  of Suchetgarh in Jammu district and Chambyal of Samba district, being created under Central funded projects of Rs. 6.39 crore, was taken up last year .

The Government   has so far released   Rs. 5.11 crore, out of which Rs. 4.68 crore have been expended on creation of different tourist facilities in these border areas. Over 80 percent construction and development work   has been completed and the tourist facilities being created at the twin border spots are likely to be thrown open by end of February next.

After taking stock of the project works, Tourism Minister, while interacting with media persons, said that the government was focusing on promoting border tourism to attract more visitors to the State. He said the initiative would help to develop border areas which possess immense tourism potential.

Jora said over the years Jammu has emerged as a major tourist destination and to expand the tourism scope beyond urban areas, the tourism related infrastructure was being constructed in Suchetgarh and Chambyal border areas for promotion of border tourism.

The Minister said Suchetgarh was being developed as a border tourist destination adding that the celebration of Basakhi festival would now be made an annual feature in the area to attract the visitors to this prime border tourism destination. He hoped that the spot would become a symbol of friendship between India and Pakistan because of its location on the zero line.

Minister for Medical and Technical Education,  R. S. Chib said that the government was endeavouring hard to promote varied tourism activities in Jammu division like other parts of the State. He said developing border tourism in Suchetgarh was a remarkable step of the government as it would not only boost local economy but also help in cultural exchange   across the border.

Chib said with the creation of facilities, the tourists would be able to have a glimpse of rich culture and lush green beauty of the border area.