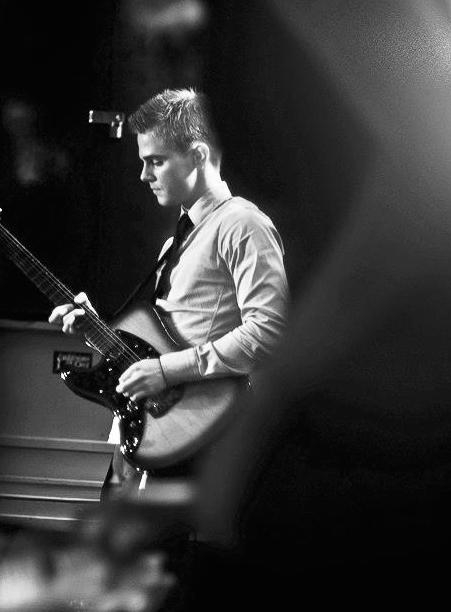 At the age of 12 award-winning multi-instrumentalist and a cappella singer Andrew Kesler was already working as a producer and recording engineer.

At the time Kesler didn’t fully realize that his accomplishments warranted any specific titles; instead, the young musical genius was simply doing what came naturally to him. In addition to writing, arranging and playing all of the instruments on the tracks he created, he was also single-handedly recording them at his home studio.

Kesler would go on to accomplish a Bachelor of Music with Honours in Contemporary Piano and Music Production from Humber College in Toronto, Canada. In truth, his musical education began at the age of 2 when he picked up the ukulele.

By age 5 Kesler got his first guitar, an unforgettable event, which sparked a love affair that would keep him holed up in the basement of his parents’ house practicing for days on end.

Kesler recalls, “As I came home I remember plugging it in and jamming along to Kenny Loggins’ “Footloose.” Although I was mostly strumming the rhythm, I remember being able to pick out the song’s key and play the root note on the downbeats. It wasn’t long before I was learning by ear all the records that my dad had in the basement. In fact, I could play Jimi’s “Foxy Lady” long before I knew what any of the lyrics meant.”

Within the next decade or so Kesler would master a dynamic range of instruments including bass, drums, French horn, trumpet, saxophone, piano and obviously guitar.

Music was infused in Kesler’s blood from the start. He says, “I was born into a very musical family. Growing up my mom was classically trained as a soprano, pianist and violinist. My dad is the definition of a rock’n roll baby boomer, having taught himself guitar and bass. He raised me on the classics like Zeppelin, Cream, Yardbirds, Beatles, Hendrix, Stevie Ray Vaughan, Grand Funk etc.”

In 2011 Kesler opened Axis Audio, a music production business through which he records, mixes, composes, arranges and takes on sound design projects. Through Axis, some of Kesler’s globally known clients have included Google, IBM, 7 UP, Five Knights Productions, Nokia and others.

Today Kesler has amassed a long list of credits as a recording engineer, working most notably in sessions with some of the industry’s top producers including Al Schmitt (Frank Sinatra, Quincy Jones, Steely Dan), Tommy LiPuma (Barbra Streisand, Miles Davis, Paul McCartney), Greg Wells (Katy Perry, One Republic) and Jeremy Darby (Lou Reed, U2, David Bowie). In fact, after working as an engineer on a session with Al Schmitt, the multi-award winning producer strongly advised Kesler to move to States where his talents, creativity and inspiring approach to music would be a refreshing addition to the Los Angeles music industry. And earlier this year that is exactly what he did.

Kesler’s knowledge and ability to play a long list of instruments has also made him indispensable in his work as a producer for other artists, as well as for the bands he is a part of.

“I have 4 albums I have released with 4 different groups. My role in these vary, sometimes focusing more on the technical side of things, and sometimes more on the musical,” says Kesler. “Regardless of what I’m doing, I have my eyes set on the big picture and it’s my responsibility to make sure everyone’s artistic goals are met.”

Some of his albums include “Dragon Suite,” which was created in collaboration with violinist Aline Homzy and released under the band title Homzy/Kesler Duo, “Diamonds EP” from the band Holy Oker in which Kesler plays alongside Greg Bevis (Bear Mountain) and Andrew Mullin, “Here We Are” released by Accent, and SOMA’s self-titled debut album.

As one would expect from most artists, the style and inspirations that influence Kesler’s work are ever changing.

“My musical style is in a constant state of progression. Starting out with rock’n roll and classical music, and that soon evolved into jazz and blues. Soon after it was funk and classic soul. Then it was more fusion and avant garde, which lead to playing world-inspired music,” Kesler explains. “About 6 years ago I developed a strong passion for a cappella singing, specifically barbershop music. That then grew to a love for close-harmony jazz singing, which is where I’m at today.”

As an a cappella jazz singer Kesler’s voice is enough to bring audiences to tears because regardless of personal preference there is no doubt about it, this young man has the voice of an angel. The raw beauty of his voice shines through crystal clear on every track that he has produced with the six-man a cappella sensation Accent.

The group, whose members live in different parts of the world and began collaborating over the Internet back in 2011, have been asked to bring their talents to prestigious festivals and events across the world. Earlier this year they performed in the UK during the London A Cappella Festival and Spice of Life. What makes their story even more unique is the fact that the first time they met in person was when they were asked to perform last year in Umeå Sweden.

Although Kesler has dedicated his life to his music, which clearly shows through the impressive list of accomplishments he has accrued to date, the fact is, he was born with extraordinary talent. What makes his story so inspiring however, is the way that he has remained a humble contributor to both the music industry and communities across the globe.

“Music has provided me with some incredible opportunities to give back to the community. Combining live music with charity is a great way to get the word out and generate support for great causes. Some of the performances I’ve directed and participated in have raised money and awareness for worldwide female education, music education for at-risk youth, inner city social work and Toronto’s gay and lesbian archives,” explains Kesler.

With charitable contributions spanning a broad spectrum of causes, some of Kesler’s involvement to date include working as the musical director and accompanist for Singing Strong: Cabarets for a Cause in Toronto in 2010 and 2011, and participating in music fundraisers like Sing Canada Harmony, Because I’m A Girl, and Band Swap.

Kesler says, “Music and art should be a reflection of social issues and encourage change, rather than be strictly a form of entertainment.”