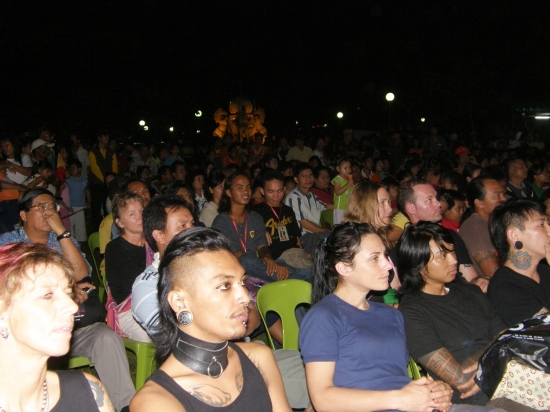 SIBU/Sarawak/04/07/07: The Iban community here is urged to revive its culture of tattoo on the body as a unique identity of the people.

The age-old culture should be appreciated as a heritage and be revived before it would be gone forever.

The message came from Malaysia’s Deputy Foreign Affairs Minister, Datuk Joseph Salang Gandum when officiating at the opening of the Borneo Dayak Cultural Festival stage on Friday night at the Townsquare.

"The tattoo culture was widely sported by our people, especially the men in the olden days, for several reasons. One of them was for indicating your achievements, the other for bravery and for adornment.

"As I understand it, if you did not have any tattoo, you would be considered as someone who had not achieved much in life," he explained.

Salang, who is also Julau Member of Parliament, elaborated that if a male had no tattoo on his body, the opposite sex would not want him for a husband.

"Today however, we might not practise this, as our women do not for tattoos on the bodies of potetial husbands, nor force any one to sport tattoo, but we should sport it for the sake of an ethnic identity.

"I know now that there’s a renewed interest in tattoo all over the world and in fact, it has become a trend.

"However, we should sport our own tribal tattoo patterns with pride, so that other people will know what race we belong to," he urged.

Cultural identity of a tribe or nationality would now be recognised by the colour, clothing or other paraphernalia.

Meanwhile, about fifty delegates from United States of America, Italy, Indonesia, Japan, China and those from within Malaysia converged at Aup Jubilee Park, from June 29 to July 1 for the tattoo convention.

The Iban community is the largest ethnic group in Sarawak State of the Malaysian Federation. Sarawak is located in the northern part of Borneo Island and commonly referred to as East Malaysia. Towards the very top of the island is the State of Sabah, also in the Malaysian Federation, while in the southern part of the island belongs to Indonesia, commonly known as Kalimantan.

Sarawak is a green paradise with most of its lands covered by hundreds of thousands hectares of tropical forest, exotic animals such the Orang Utan, the biggest flower in the world and has at 27 ethnic groups of diverse cultures and excellent hospitalities.

Similar tattoo conventions are expected to take place here, either on yearly or biennial basis, according to the organizers – an excellent venue for tattoo lovers, artists and studio owners.