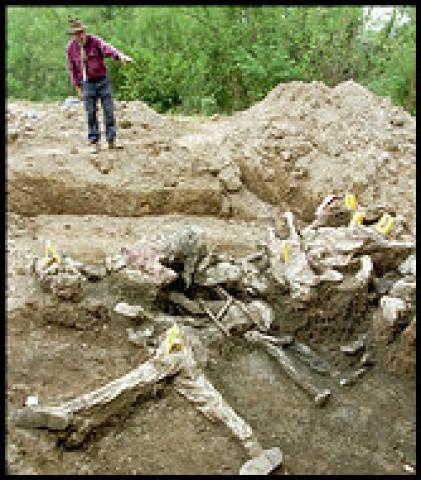 For over a decade, Bosniak Edo Ramulic has been searching for the bodies of his brother and several other family members killed by Serb forces in the north-western Bosnian town of Prijedor in 1992.

A year ago, a young man offered him information about a mass grave where he claimed 30 bodies of people killed in Prijedor were buried, including Ramulic’s brother. However, the tip-off came with a heavy price tag attached.

“He wanted 10,000 euro for that information,” said Ramulic. “I told him I would try to find the money, but he never contacted me again.”

Ramulic said he was not surprised that the man wanted a reward for the tip-off on the mass grave’s location because “that’s a common practice in Bosnia”.

He added that a mass grave containing the bodies of 40 murdered Bosniaks was found near the town of Bosanski Novi in the Prijedor region, after another man demanded a favour from the authorities in return for revealing the site.

“The man who provided information on this mass grave to the Bosnian authorities wanted a roof on his house to be repaired in return, and his demand was met,” said Ramulic.

The Bosnian authorities say that people have been selling and buying information on the locations of mass graves since the beginning of the 1992-95 war, and there is very little they can do about it.

“Soon after the war broke out in 1992, individuals tried to get money by providing information about the locations of prisoners of war and detained civilians,” said Amor Masovic, former head of the Federal Commission on Missing Persons.

“This practice continued after the war, only now informants are seeking money for a tip-off on single and mass graves locations.”

He said that a number of individuals from all ethnic groups had contacted the commission trying to sell information on mass grave sites, “Even people of the same nationality as those buried in those mass graves requested money for revealing information.”

Masovic said he suspected that some of the people who had this information were directly involved in burying the bodies.

“You could tell that by the detailed knowledge they had of the burial site,” he said.

However, other informants appeared to only have second or third-hand knowledge about the mass grave sites, he said.

According to Masovic, informants demand various sums of money for a tip-off – from just a few euro up to one million.

“Some people had requests that did not involve money, such as help in getting a passport, a visa, or political asylum abroad. In one case, the informant asked for one million euro for the tip-off on a mass grave site,” said Masovic.

“Although we have neither a mechanism nor the funds to meet such demands, on more than one occasion, some members of my staff collected money from their own…allowances in order to obtain information on a mass grave site.”

Ramulic believes that hiding information about war crimes – including locations of mass graves – is also a crime. He said that those who charge others for revealing such information should be punished, not rewarded.

However, many families of missing persons believe that is the only way they’ll ever find their loved ones.

“Families of the victims need a sense of closure. That’s why they are prepared to go to great lengths in order to at least find the bodies of their loved ones,” said Seida Karabasic from the Prijedor Victims’ Association.

“We know that, unfortunately, some of them have already paid hundreds of euro for each body they found, but our association was never involved in this.”

Karabasic noted that the information offered has in most cases proven to be accurate and that sellers appear to be from the area where crimes were committed, because “they know the area well, and can identify the victims by their first and last names”.

Milan Bogdanic, former president of the RS Commission on Missing Persons, said it is likely that selling information on grave sites will continue, as most people are reluctant to volunteer this knowledge.

“Only a few people in possession of information about mass or single graves will tell us what they know out of human compassion or to ease their own conscience. Also, many of those who could help us locate graves are afraid they would be implicated in these crimes, so they hesitate to come forward,” said Bogdanic.

“That’s why we wanted this to be regulated by law and we wanted government institutions to get involved in the process, but some of the victims’ families rejected that idea.”