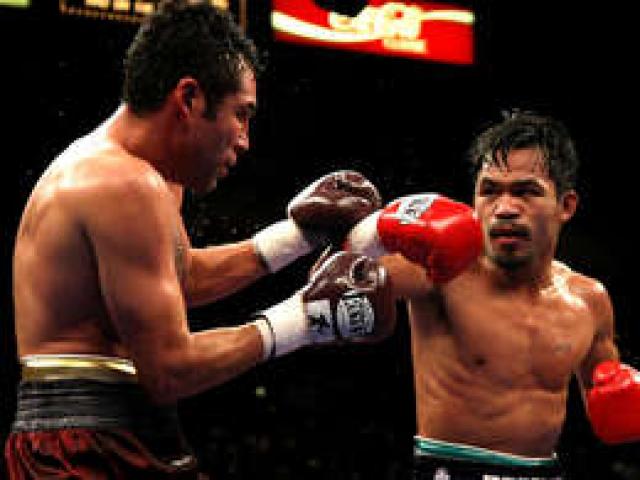 2008 will be remembered for Joe Calzaghe’s unbeaten record and David Haye’s emergence as a major heavyweight.

On a global scale, the trend towards global carnival-style fights gave a cause for concern but there was no doubt about the fighter of the year after Manny Pacquiao’s stunning stoppage win over Oscar De La Hoya.

Here we take a look at some of the highlights from the boxing year just about to end.

BRITISH FIGHT OF THE YEAR:

2 Amir Khan W TKO 5 v Michael Gomez: Khan had to dig deep to come through a predictably wild and woolly affair against the Manchester veteran after being floored in the second round in front of a raucous Birmingham crowd.

3 David Haye W TKO 2 v Enzo Maccarinelli: It was always going to be over in an instant one way or the other but the buzz generated in the build-up to this cruiserweight unification contest swept boxing back onto the back pages.

WORLD FIGHT OF THE YEAR:

1 Antonio Margarito W TKO 11 v Miguel Cotto: Margarito seized his big chance to gradually wear down the unbeaten, feared Cotto, knocking him down twice in the 11th round to snatch the world welterweight crown in sensational fashion.

2 Israel Vazquez W Pts 12 v Rafael Marquez: Vazquez got the better of the latest leg of the pair’s enthralling super-bantamweight trilogy, recovering from an early knockdown to edge a split decision after 12 rounds of non-stop action.

BRITISH FIGHTER OF THE YEAR:

1 David Haye: The Bermondsey braggart demolished domestic rival Enzo Maccarinelli then emphatically proved he has what it takes to be a major player in the heavyweight division by sparking out fringe contender Monte Barrett.

2 Joe Calzaghe: Impossible to argue with the ledger of the unbeaten Welshman, who deservedly edged an ugly fight against spoiler Bernard Hopkins in Las Vegas before putting on a boxing masterclass to sink Roy Jones Jr.

3 Ryan Rhodes: The days when he was a fresh-faced prospect hanging onto Naseem Hamed’s coat-tails seem decades ago but three fine wins turned Sheffield light-middleweight Rhodes back into a champion at the age of 32.

WORLD FIGHTER OF THE YEAR:

1 Manny Pacquiao: Impossible to argue against the irrepressible Filipino, who began his stellar year by edging old foe Juan Manuel Marquez, moved up to lightweight to stop David Diaz, then scored his stunning win over De La Hoya.

2 Juan Manuel Lopez: The powerful, fast-handed Puerto Rican is a superstar waiting to happen. Unbeaten in 24 fights, three of his four outings in 2008 ended in the first round – including an astonishing stoppage over Daniel Ponce de Leon.

BRITISH PROSPECT OF THE YEAR:

Tyson Fury: Forget his facile first-round win over tiny Hungarian Bela Gyongyosi this month. The 6ft 9in, big-hitting former amateur star with the best name in the business has the power and personality to go a long way.

WORLD PROSPECT OF THE YEAR:

Yuriorkis Gamboa: The super-sleek Cuban is heading for the big-time and with four of his five outings in 2008 ending before the second bell, expect Gamboa to be stepped up significantly in class in the year ahead.

Filed under: Sports
Share Tweet Pin G Plus Email
previous article: November Earning is not Credited Yet ! Is Ground Report Stop Paying ?
next article: Most Memorable Sporting Moments of 2008