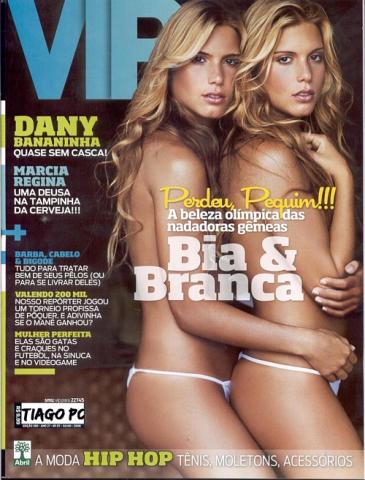 Branca and Bia Feres are celebrities in their home country of Brazil. It might be because they are going to represent Brazil in the Beijing Olympics in the sport of synchronized swimming, but it is probably because they are breathtakingly beautiful models.

Branca and Bia Feres will appear on the cover of Brazil’s VIP magazine where the world can get a sneak peek of what is to come in the Beijing’s Olympic pool later this month. Following American swimmer Amanda Beard, who appeared in Sports Illustrated: Swimsuit Edition and Playboy the Feres twins are clad in nothing but thong underwear in some of VIP’s photos. The Feres spread in VIP has the scantily-clad twins spooning and spraying water on each other, photos that would probably be considered soft-core pornography in the United States. Customs regarding nudity are more relaxed in Brazil and a lot of men will be happy about then when they pick up a copy of VIP or see the photo spread which is taking the Internet by storm.

Branca and Bia Feres will appear in the Olympics synchronized swimming events starting on August 18. If you want to see the twins live, the duet technical routine is scheduled to begin at 3 a.m. EDT.