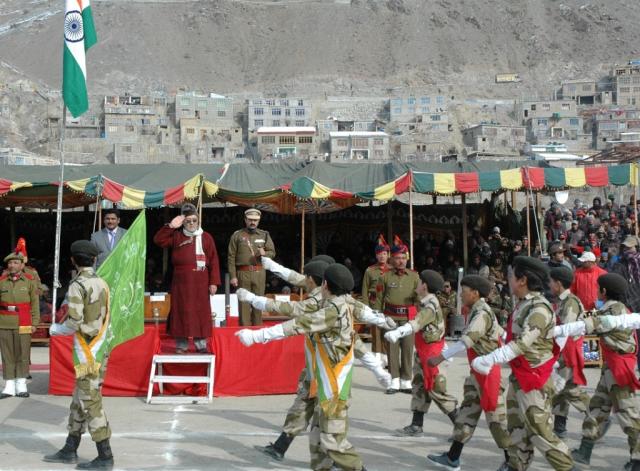 A large number of men and women thronged the stadium to witness the celebrations.

Addressing the gathering , the Chief Executive Councillor recalled the supreme sacrifices of the national heroes who laid down their lives for the sake of the country. He also appreciated the role of the soldiers guarding the frontiers of the country especially in difficult and inhospitable conditions and extolled the role of the Army and the security forces for their valor and alertness. He also lauded the role of J&K Police in maintaining law and order in the region.

Giving a brief overview of the achievements of the present Hill Council in Kargil, Kacho Ahmed Ali Khan said that at present developmental projects worth rupees 5 hundred crores are underway in various sectors in the district that include the construction of 200 bedded hospital and ANMT school at Kurbathang, works at various motorable bridges, lift irrigation scheme at Sodh,  lift water supply scheme Kargil Town and Kurbathang, construction of winter sports stadium, Boys Hostel at Jammu among others and added that the installation of CT Scan Machine at District Hospital Kargil, installation of Central Heating System at Sub District Hospital Sankoo, providing of Government jobs to   508 unemployed youths of the district, distribution of 2000 home lighting units to un-electrified areas, completion of 16 solar power plants are some of the main achievements of the current council.

He urged the people to uphold the virtues of the age old communal harmony and brotherhood for peace and prosperity of the State. He also emphasized the need of cooperation between the government and the masses in the implementation of the innumerable developmental schemes for their timely completion for early benefits of the people.

Colorful cultural programmes by the artists of Information Department, J&K Academy of Art, Culture and Languages and the school children were also presented on the occasion.

Later the CEC distributed prizes and mementos among the contingents and the cultural troupes who participated in the celebrations.

Republic Day was also celebrated at Drass, Sankoo, Chikten, Zanskar and other block headquarters of the district.