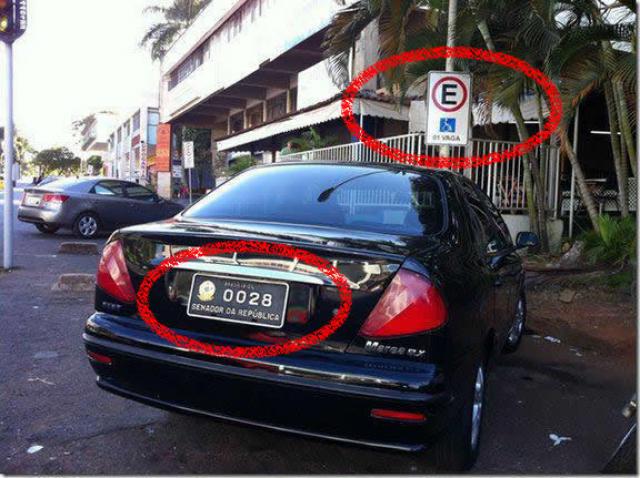 Very many politicians all over the world are known for their involvement in corruption, for taking advantage of their positions to become wealthy (or wealthier!) and Brazil’s politicians definitely can’t avoid being associated with this stereotype!

However, there is one thing Brazilian politicians do better than others: their careless attitude towards the rest of the society!

Here is an example with Senator Roberto Requião whose car was photographed on July 6, 2012 parked on a disabled parking space!

The picture was spotted on the internet by pedagogue and blogger Vera Garcia through her blog Deficiente Ciente a blog directed at democratising information about disability in Brazil.

The picture indicates clearly that it is a Senator of the Republic of Brazil’s car (SENADOR DA REPÚBLICA), registration 0028. It was later confirmed by the Brazil Federal Senate, according to Deficiente Ciente, that the car is Senator Roberto Requião’s and that it had not received any fine recently.

The news and the photograph have since spread over the internet through social networks Facebook and Twitter, with harsh comments condemning the choice of parking space and the situation.

Well done Senator! Your name and your deeds are now famous all over the world.