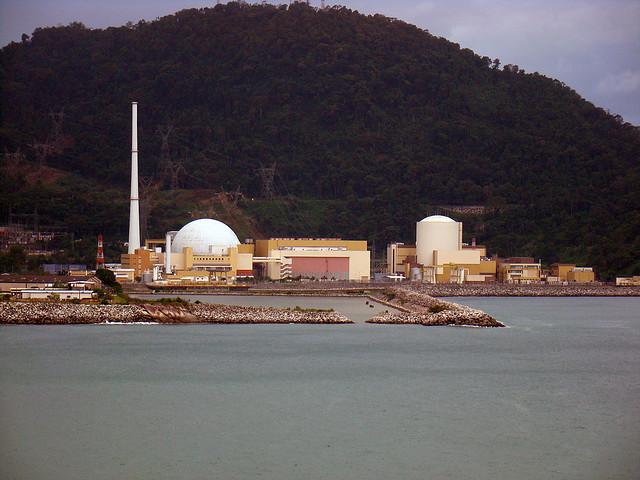 26 years ago, Chernobyl (Ukraine, Soviet Union). Last year, Fukushima (Japan). Could Brazil, boosted both by its new position as the world’s sixth largest economy and its current vibrant economy, decide to rethink totally its nuclear ambitions – be they civil, or maybe even military – but end up being the next victim of a nuclear catastrophe?

.
In an interview given on Brazilian TV Band, on Sunday night, the Chairman of Eletronuclear (Brazil’s nuclear power company, established in 1997 and subsidiary of Eletrobrás) was being questioned about Brazil’s future with nuclear power and the expansion of the country’s nuclear power programme, decided in 2008 by former President Lula da Silva to meet the electricity needs of the South American booming economy. [CNN, July 31, 2008]
.

THE EARLY STAGES
Brazil has connected its first nuclear reactor, Angra 1, to the power grid, in 1985, and its sister reactor Angra 2, in 2000, at the Central Nuclear Almirante Álvaro Alberto, Brazil’s sole nuclear power plant, in the State of Rio de Janeiro. Angra 3, the plant’s third reactor, should be completed by French multinational Areva in 2014. The construction of the nuclear plant started in 1972, on a cove called Itaorna by the Brazilian indigenous (“Itaorna” in Tupi-Guaranican be translated by “the floppy stone” or “the moving rock”) well known for being located on an earthquake fault zone [The Independent, April 13, 1993], and situated just 3 kilometres from Praia Brava beach and about 80 kilometres from the city of Rio de Janeiro.
Brazil has intended to build many more nuclear plants after the Angra plant, in Iguape,Peruíbe and São Sebastião for example, however, these projects were all shelved after theAngra reactors were met with various problems ranging from malfunctions, stops and other incidents. The most recent one occurred in 2001, when 150 litres of radioactive liquid was dumped into the ocean as a result of a defect in a water valve indicator in the security tank. [Business News Americas, October 8, 2001] At the time – as it is unfortunately usually the case in such situation – the Brazilian nuclear power committee (CNEN) advisor, Rogerio Gouveia, confirmed that when the radioactive liquid leaked, “(the vital information) was not communicated to the population at the time because there was no danger.” If the incident had been more serious than a “simple” radioactive leak (which is already a very serious matter!), that deliberate blackout from the CNEN could have been fatal to those living within a close perimeter to the nuclear plant.
.

NUCLEAR SAFETY VS NUCLEAR JOKE
The safety and the monitoring of the Angra plant still remain today a concern for local populations and environmentalist groups such as Greenpeace. Precisely, on its website, the non-governmental environmental organisation tells the story of Agostinho de Araújo Soares, 57, who had worked for over 10 years at Angra 1 changing the fuel and pipes. “In the final years, I was already feeling very weak, with pain all over my body,” he explains. “When my hair started to fall out I was fired. Recently, I found out that my heart is swollen and I think that my bones have been affected, but I can’t find a hospital to treat me… no hospital in nearby Rio will want to treat me, because they don’t treat people who suffer from radioactivity… I live 15 kilometres away from the nuclear power station. Seems to be far, right? I tell you, however, that there won’t be time to evacuate everyone if an accident occurs.”
Agostinho’s testimony to Greenpeace is in clear contrast with what Othon Luiz Pinheiro da Silva, the Chairman of Eletronuclear, answered to the journalists of Band, on Sunday. When asked about the safety of nuclear energy in general, da Silva offered his vision of the Japanese catastrophe – typical answer from a pro-nuclear: “In Fukushima, only 2 people died inside the nuclear plant,” he said, “while the thousands of other victims were killed by the Tsunami. Nature killed them, not the nuclear!” Any risk of a Fukushima style accident at the Angra plant at all? “No way, we don’t have Tsunamis and there is no earthquake in the region!”
.

BRAZIL AND THE ATOMIC BOMB
Suddenly, the conversation slid into what can only be described as the Twilight Zone! One journalist asked him: “Now, what is it with your obsession with nuclear submarines?” Smiling, the man explained that he thought Brazil should be equipped with at least six nuclear submarines to be ready in case of a conflict. “But by nuclear submarines, I mean submarines powered by a nuclear reactor and armed with conventional weapons, not nuclear devices,” he said, trying to reassure everyone. Then, he added that the problem right now is that the Brazilian Navy doesn’t want any “even though they wouldn’t cost more than 1 or 2 million dollars each…” Peanuts, right?
“God,” he said, “has, fortunately, placed us geographically far from the main conflicts in the world, so we have a different view on wars and on the risks for our nation. However, I think we have to stay alert. Economic crisis are factors of wars.”
“Is it your opinion that Brazil should get the Atomic bomb?” Finally asked one of the journalists. “The Atomic bomb? We surely have the technology to get there,” ensured da Silva. “If we were in a situation where we would need it, I think we, nuclear scientists, could gather our knowledge to get it done.”
.

WHICH PATH?
Whatever path the Brazilian government will decide to take in the months and years to come, it could have a serious impact on the country’s future and on the world’s as well. Will Brazil follow the advices of its thoughtless pro-nuclear scientists and carry out some scary nuclear power ambitions? Or will Brazil ignore the “Nuclear Club” temptation and choose a more peaceful path? Will Brazil, learning from Fukushima, lead the other nations to rethink their nuclear power programmes?
Only time will tell, they say. Maybe the fact that the Brazilian Congress has recently approved significant changes to the Forest Code Law, which currently protects Brazil’s forests (including the Amazon rainforest), is already a sign that Brazil has, unfortunately, already chosen which path it won’t take! [BBC, April 26, 2012]
.
[Note: Read an extensive report on the history of Brazil’s nuclear power programme on environmental science and conservation news site Mongabay.com]
.
.
Copyright © 2012, J.N. PAQUET – All rights reserved.