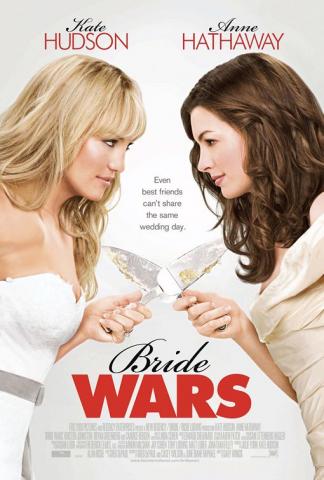 Bride Wars portrays the story of two best friend’s well-built bond turning in to a full fledged war as the both the girl’s wedding comes up on the same date. The soft and sweet Emma
(Ann Hathaway) and the bold and aggressive Liv (Kate Hudson) have had planned every detail of their very special day since their childhood.
It all starts when the best buddies get engaged and head to the wedding planner to fix their wedding dates at their dream venue, New York’s ultimate bridal destination the Plaza Hotel. They settle on with different dates for their respective weddings and rejoice it blissfully being totally unaware of the complications that are going to rise. A clerical error causes a clash in their dream dates and shatters the upbringing plans into pieces creating a blow between the closest pals.
When the wedding planner informs Liv and Emma that their respective weddings are scheduled on the same date due to a secretarial mistake, it was an utter shock for both of them. The two sisters like friends anticipate on each other to move the dates, but amplifying the curiosity level of the audience, neither of them takes the initiative instead the girls prove the stubbornness and fix the same day as their wedding date.
That bursts out the intimate bond and the girls are set with only one aim ruining the best friend’s wedding and making a hell out of it, yeah then there is the real war!
The successful lawyer Liv who prefers perfectionism, is not ready to reconcile with anything less than perfect with her wedding which she is been planning for years. On the other side of the battle, the sweet school teacher Emma who gives priority in taking care of other’s needs just could not allow herself to be the second best? On her wedding day she also wants to be the number one, and she could not stay calm when her own dream wedding is jeopardized.
Talking about the lead actor’s performance in the movie one of my favorite stars Ann Hathaway’s portrayal as Emma is amazing and gorgeous Kate Hudson gave a picture of Liv’s character brilliantly.
The story of this wedding comedy is cute and funny. Director Gary Winick depicts the rage between the dear friends in a humorous way; you won’t be able to resist a good belly laugh watching each one’s attempt to rain on other’s parade.
While Liv messes up Emma’s pre wedding glow giving her orange tan, Emma louses up with Liv’s hair color making it blue. Absolutely entertaining, you would love every bit of it.
Filed under: Media & Tech, Music & Film
Share Tweet Pin G Plus Email
previous article: Sri Lanka Scores dead in battle for rebel enclave
next article: PDP hell bent on Islamisation of Kashmir : BJP