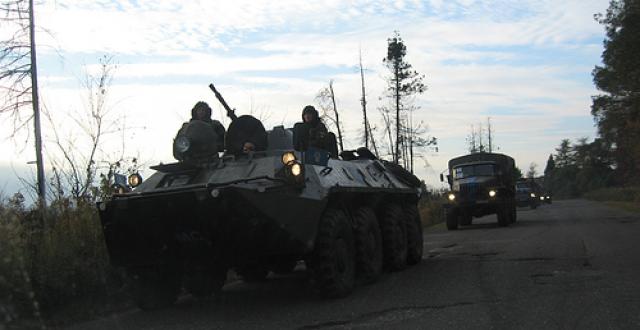 If you’re deep in the trenches, stop digging. Both Russia and Georgia darkly warned last week of the danger of war over the Black Sea territory of Abkhazia, but they both keep digging.

Georgian president Mikheil Saakashvili said Moscow and Tbilisi have come "very close" to a military confrontation. Russia threatened Georgia, moving in an extra 500 troops to join the force it leads in Abkhazia. Formally peacekeepers under an international mandate, these troops not only keep the peace – on Russian terms – but strengthen Moscow’s grip over a region that is legally part of Georgia.

In Moscow, Georgia-baiting has now become a popular sport. Vladimir Putin dramatically stepped up his support for Abkhazia and hostility toward Georgia in the last two months of his presidency in what looked like an effort to lock his successor, Dmitry Medvedev, into a hard-line policy.

Saakashvili is also using the putative threat of Russian aggression for domestic political purposes and to call for western support. His own standing has recently suffered after his crackdown on the opposition last November and a suspiciously wafer-thin re-election as president in January. His governing party is now facing a tough fight in parliamentary elections on May 21.

The talk I heard in Tbilisi ten days ago was that some hotheads around the president are tempted to make a move on Abkhazia, perhaps as early as next week, to boost popular support for the president ahead of the elections. Wiser voices, such as that of Prime Minister Lado Gurgenidze, are warning that this would be a catastrophe.

It is clear that Russia manipulates the Abkhazia conflict to punish Georgia for trying to escape Moscow’s orbit of influence and move closer to the West. A telling moment was when Sergei Mironov, speaker of the upper house of the Russian parliament, in October 2006 let slip, "We won’t forgive those who spit at us."

As a result of Tbilisi’s aspirations to join the European Union and NATO, Russia has bullied its southern neighbour. In autumn 2006, Moscow banned the import of Georgian wine and mineral water – long a fixture of Russian dinner tables – on the dubious grounds that they were "unsanitary", imposed a transport blockade, and brutally deported Georgian migrant workers.

Most blatant have been Russian incursions into Georgian airspace, including two rocket attacks on remote parts of Georgian territory last year. Thankfully this demonstration of power did not cause any casualties. This is where Georgia deserves the West’s unwavering support. A much swifter investigation into these incidents and a much blunter response from western governments might have deterred Moscow from further aggression. A Russian rocket attack on Georgia should be no more tolerated than a Russian attack on, say, Finland.

In addition, it is time for Brussels to revive a shelved plan to set up an EU monitoring mission on the Russian-Georgian border. But as much as Moscow is using the Abkhazia conflict to settle old scores with Tbilisi, the Georgians are missing the point by blaming Russia alone for their trouble with the renegade province. Russia is a secondary actor in this dispute. Even if it had not intervened, there would still be a Georgian-Abkhaz problem that needs to be fixed.

The Abkhaz are a small ethnic group unrelated to the Georgians, who have shared with them for centuries the same beautiful stretch of Black Sea coastline.

During the perestroika era the Abkhaz demanded greater autonomy from the Soviet Republic of Georgia and felt threatened by a resurgence of Georgian xenophobic nationalism. War started in 1992 with a Georgian army sacking of the Abkhaz capital, Sukhumi, and what could be termed ethnic cleansing of Abkhaz. Then the Abkhaz managed to turn the tide with Russian military support and defeated the Georgians. The majority of the prewar Georgian population of Abkhazia – around 239,000 people, or 45 per cent of the total population – left in what amounted to a second act of ethnic cleansing.

The Abkhaz won a bitter victory in a nasty ethnic conflict in which both sides committed crimes. For the next decade Abkhazia existed as a miserable hinterland in a state of self-declared independence.

When Saakashvili was elected president in 2004 with a huge popular mandate for change, he had a historic opportunity to be the Charles de Gaulle of the Caucasus. But instead of offering a grand peace deal to the Abkhaz, Saakashvili maintained a policy of economic isolation and moral outrage over the secessionists.

He even moved extra troops into the mountains of Abkhazia. And when he started on the path of NATO accession, he did so without offering any assurances to his pro-Russian breakaway provinces (the other one is South Ossetia) on what this would mean for them.

Two months ago, the Georgian government finally unveiled a comprehensive peace plan – almost 15 years after the war. It offered the Abkhaz substantial powers within Georgia, including the vice presidency. Unfortunately, the plan broke the first law of peace negotiations: it was launched unilaterally and without consulting the other side. And so the Abkhaz rejected it.

Saakashvili then last month made an inept speech to his Abkhaz and Ossetian "brothers and sisters" in which he told them to fear Russia and their own "corrupt, criminal" leaders and wildly inflated the number of Georgian refugees.

There is no love lost between the Abkhaz and the Russians. Wry inhabitants of Abkhazia like to say that both the Russians and Georgians, remembering their idyllic childhood summer holidays by the Black Sea, want Abkhazia but without any Abkhaz. It was Georgian clumsiness that drove the Abkhaz into the embrace of Russia. Any nation would be alarmed to have a large, well-armed bully as a neighbour – this is how the Georgians feel about Russia and how the Abkhaz feel about Georgia.

Western countries have been happy to pretend that by maintaining a small United Nations mission of 130 unarmed observers (entirely reliant for their security on Russian peacekeepers) they are offering a road map to peace in Abkhazia. This timidity has allowed the Russians to reshape the facts on the ground.

After much hand-wringing – and Georgian resistance – the EU approved last year a small aid programme for Abkhazia and despatched two police officers to join the UN mission. Compare this to what the Russians have offered the Abkhaz: Russian passports that allow them to travel to the outside world, pensions for the elderly and, latterly, massive investments ahead of the nearby 2014 Sochi Winter Olympics. It is not surprising where Abkhaz loyalties now lie.

Abkhazia is now virtually lost to Georgia – almost as lost as Kosovo is to Serbia. The only chance for Tbilisi to reverse this process and see Georgian refugees ever returning to their home is, paradoxically, to let go. Tbilisi should open up Abkhazia and free it from dependence on Russia. That means lifting sanctions and permitting a sea link to Turkey and the re-opening of a railway line connecting it with Western Georgia.

Such a policy would change the atmosphere and call the Abkhaz bluff – forcing them to negotiate in earnest and confront the issue that holds the key to their future status: Abkhaz responsibilities to their prewar Georgian population. And the rest of us would sleep a little easier if only this tinderbox in the Caucasus could be damped down.

This article first appeared in the Wall Street Journal.

The views expressed in this article are not necessarily the views of IWPR.

Filed under: Opinion, World
Share Tweet Pin G Plus Email
previous article: “Nothing to Hide” From Nuclear Inspectors
next article: Florida and Ohio Are Not Necessarily Required For Victory, Says Obama Campaign