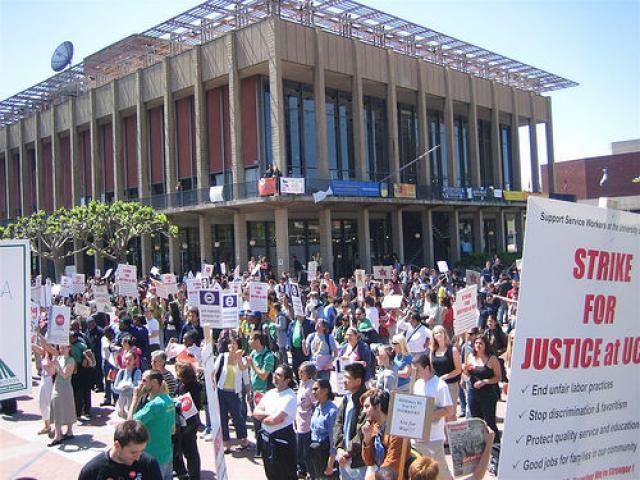 College students from California to New York to Florida this week are raising their voices demanding justice for workers on campuses and in their communities. Yesterday, students at more than 20 universities rallied at Burger King restaurants where they delivered a strong message to the “exploitation king” that slavery in our nation’s tomato fields will not go unnoticed nor unchallenged.

The rallies kicked off the ninth annual week of action, sponsored by the Student Labor Action Project (SLAP) and co-sponsored by the AFL-CIO and several unions. The actions take place March 28–April 4 between the anniversaries of César Chávez’s birth and the assassination of Dr. Martin Luther King Jr.

In advance of the national action week, members of the Latino student group, MEChA, last week gathered at Sacramento State University and took part in the rally in support of the Blue Diamond workers in their struggle to join the International Longshore and Warehouse Union (ILWU).

SLAP Coordinator Carlos Jiminez told the students the week of action is about solidarity (see video above):

Solidarity means I see my struggle on campus…in my community…at the workplace is connected to your struggle and to a bigger struggle for justice.

In other actions this week, Coalition of Immokalee Workers (CIW) members will speak to classes at the University of North Carolina in Chapel Hill, and students at Wichita State University will carry buckets of tomatoes across campus to illustrate their solidarity with the workers.

Students at Miami University in Oxford, Ohio, will spotlight the need for a decent life for campus workers by releasing their proposal for a living wage for those workers. Meanwhile, students at Western Washington University in Bellingham, Wash., will celebrate the life of César Chávez with a campus-wide dinner and fundraiser.

Many of the student events will support the struggle of tomato workers, members of the CIW, who are reaching out to 1 million people to sign a petition demanding that Burger King and food industry leaders improve wages for workers who pick tomatoes and help eliminate slave labor-like conditions and human rights abuses from Florida’s fields.

In January, federal officials in south Florida arrested Antonia Zuniga Vargas on a 17-count indictment, charging her with conspiring to make money off workers from Mexico and Guatemala, forging documents and committing identity theft. Vargas, along with five other co-defendants, is connected to a business operation in Immokalee, Fla., allegedly created to hold workers in involuntary servitude and peonage.

Chief Assistant U.S. Attorney Doug Molloy told the Fort Myers News-Press Vargas and the others are charged with:

…slavery, plain and simple. Some of the folks have been there for years. It is the hope to send back money to their families, and they hang on to that hope. It’s just a situation that’s difficult to get out of.

Last April, the CIW won a groundbreaking agreement with McDonald’s, the world’s largest restaurant chain. The fast-food giant agreed to pay a penny more per pound to workers harvesting tomatoes, which means the workers get 72 cents to 77 cents for every 32-pound container of tomatoes they pick, up from 40 cents to 45 cents. But Burger King, the world’s second-largest hamburger chain, has rejected working with the CIW to improve farm workers’ wages and conditions.

Filed under: Lifestyle, US
Share Tweet Pin G Plus Email
previous article: America: Truckers on strike to protest fuel hike
next article: The story of All Fool’s Day