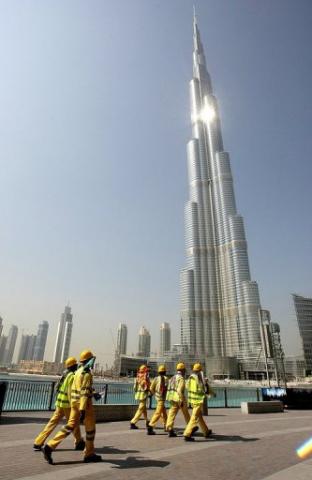 Blazing fireworks and dazzling lights marked the opening of the world’s  tallest tower, Burj Khalifa. The tower is 818 meters(2,684 feet)high and pips all its nearest rivals, including the 101-storey high and Taipei tower in Taiwan. This ‘vertical city’of luxury apartments and a hotel was built at a cost of $1.5 billion with each floor costing $9 million. The good news for the developers is that about 90 percent of this building is already sold. Dubai’s Burj boast the highest occupied floor of any building in the world. Emaar properties, the biggest developers in the Gulf,said only 160 of the 200 floors of the tower would be occupied with the 40 remaining floors left for services. The tower will have 1,044 apartments and 49 floors of office space serviced by 57 high-speed lifts.
Work on the world’s new tallest building started in 2004 and new floors were being added almost every three days. Over 14,000 labourers have worked on several floors  of the tower giving final touches to the high-rise,with more than half of them coming from India, a construction official had said. The opening of the tower comes after the once booming real estate sector in the Emirates has crashed,halving the value of most of Dubai properties in comparison with peak prices, when they were selling for a staggering $1,900 per square foot.
The city state has now turned to its oil – rich neighbour Abu Dhabi for a series of bailouts  totalling $25 billion to help cover bebts amassed by state –linked companies. Burj developer Emaar is partly owned by the gobernment, but has not received any emergency cash.