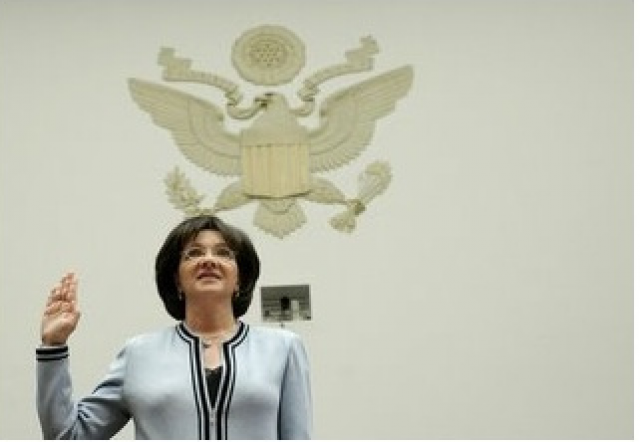 After having been head of the U.S. government’s General Services Administration (GSA) since late May of 2006 as that agency’s first female leader, Lurita Doan has resigned.

The GSA employs 12,000 people and is given an annual federal budget of $20 billion to keep up the thousands of buildings and properties that the U.S. federal government owns.

Last month, the House Oversight Committee under the leadership of California’s Democrat Henry Waxman raised questions about whether Doan improperly handled contracts in attempts to use her position to give unfair advantages to Republican candidates. Waxman at that time demanded that Doan resign, but she refused.

Doan has denied any and all charges by the Democrats in Congress, and points to her role in bringing fiscal restraint and less red tape to the GSA in order to better help small businesses.

However, last May the independent Office of Special Counsel’s Scott Bloch found Doan guilty of violating the Hatch Act, which specifically addresses the undue and unfair influence of partisan politics in the GSA and related administrative federal services. Other less official accusations against Doan include cronyism and using her authoritative position to intimidate agency employees.

But perhaps even more influential in the decision by the Bush Administration to ask Doan to resign, Doan has been in a constant fued with agency Inspector General Brian Miller since she first took the helm of the GSA.

Counsel to the inspector general at the Corporation for National and Community Service Vincent Mulloy last March threw out an official complaint that Doan had in fact filed against Miller:

"[The complaint filed with the President’s Council on Integrity and Efficiency] should be considered without merit, and closed, to end the distraction of GSA office of inspector general personnel from their duties."

Doan was very displeased with the ruling and stated as much quite openly.

“It would be a shame if this decision had anything to do with the hyperbolic and unfounded allegations of Scott Bloch and others who were after her just to claim another administration scalp…the administrator appears to have fallen victim to a bureaucratic culture that fears, rather than rewards, entrepreneurial spirit, innovation and bold leadership," said Congressman Tom Davis of Virginia, a Republican.

In departing her position, Doan issued a statement in which she said:

"It has been a great privilege to serve our nation and a great president. The past twenty-two months have been filled with accomplishments…These accomplishments are made even more enjoyable by the fact that there were lots of people who told us they could never be done."