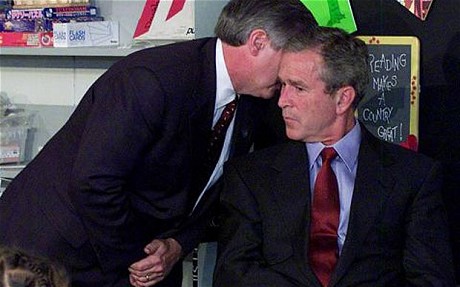 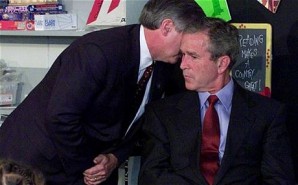 President Bush being informed of the 9-11 attacks by his chief of staff in Florida classroom.

In his book Decision Points, former president George W. Bush describes the “fog of war” during the 9-11-2001 terrorist attacks that killed over 3000 people.

The fog of war (in German original “Nebel des Krieges”) is the uncertainty in situational awareness experienced by participants in military operations, according to Wikipedia.

“When we did receive information, it was often contradictory and sometimes downright wrong. I was experiencing the fog of war. There were reports of a bomb at the State Department, a fire at the National Mall, a hijacked Korean airliner bound for the United States, and a call in threat to Air Force One. The caller had used the plane’s code name, Angel, which few people knew. The most bizarre report came when I was informed of a high speed object flying toward our ranch in Crawford. All of this information later proved to be false. But given the circumstance, we took every report seriously.” pg 131.

I should add that the Angel code name for Air Force One on 9-11-2001 was in fact compromised somehow, according to various reports.

That aspect, as far as I know was never investigated because there was more pressing issues at the time of the attack and following the 9-11 attacks.