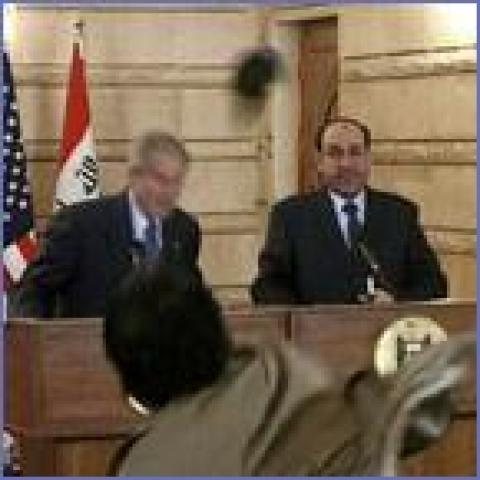 I do not support what happened to Bush in but I must say that the war on was a very bad idea indeed.

Bush is the same person who has ruined economy, has made funny statements like "Global warming is not a man made environmental hazard". He was right in but would have been a popular president today if he had attacked ‘s terror camps and killed Osama Bin Laden instead of attacking and ruining the life of Saddam Hussain who was by no means responsible for 9/11. He prevented and even neglected ‘s repeated plea of being the key factor of Global Terrorism.

He provided and is still providing billions of dollars in the form of financial aid to . This aid is, however, used to fund the terrorist organizations such as JuD that was formerly known as LeT. This is done with the help of Pakistani military and Pakistani intelligence agency, ISI. The civilian government of has no control over them and has even declared JuD as a social organization. So, there is little to wonder why Bush is disliked in many countries of the world for both right and wrong reasons.

Even Pakistani people dislike Bush as he declared war on – a scapegoat of and provided liberty to that terror struck country. They dislike him even more because he declared war on killing a vast Muslim population. He declared war on for capturing the oil wells and with a sincere hope of reducing the oil crisis in U.S into a big zero. However, the plan failed and he got a pair of shoes as a farewell gift from . A more agonizing factor is that the journalist has gained positive popularity in Iraq.

Most people of the world feel like throwing shoes at him as he is one of the main reasons for the bad economic condition of U.S, for the sad and unsecured condition of , for the increasing hold of Taliban in and for the discontent in as well. Most important of all he is responsible for a terrible global threat called "Global warming" for helping it reach an alarming state! Even for the worst of all threats "Global Terrorism" has also reached an alarming state because of Bush’s love for .

The only good thing happening at this moment is that finally both U.S and the world will get relief in just a few days from the most unpopular President of the .