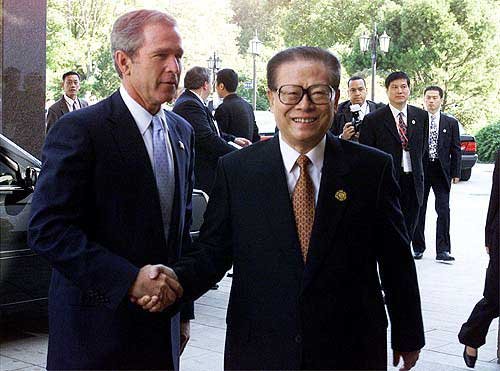 Bush shakes hand with Jiang Zemin in 2001 at the same time he was trying to blackmail China using the specter of a nuclear armed Japan.

In his book “Decision Points”, former president George W. Bush discussed the fact that he actually tried to blackmail China using the specter of a nuclear armed Japan. The mere suggestion of which must have made the Chinese president really scared and frightened.

It must be remembered that the Chinese suffered grievously under Japanese military occupation in WWII. between 1937 and 1945, the Japanese military murdered from nearly 3 to over 10 million people, including “6 million Chinese”, Indonesians, Koreans, Filipinos and Indochina, among others, including Western prisoners of war (source: http://en.wikipedia.org/wiki/Japanese_war_crimes).

Here is exactly how Bush himself describes it:

“In January 2003 I told President Jiang that if North Korea’s nuclear weapons program continued, I would not be able to stop Japan – China’s historic rival in Asia – from developing its own nuclear weapons. You and I are in a position to work together to make certain that a nuclear arms race doesn’t begin, I said. In February I went one step further. I told President Jiang that if we could not solve the problem diplomatically I would have to consider a military strike against North Korea.”

The revelation of this information is most shocking considering that North Korea had a nuclear strike capability at the time, according to confidential sources.

These and other shocking revelations are found in the former president’s personla memoirs http://en.wikipedia.org/wiki/Decision_Points