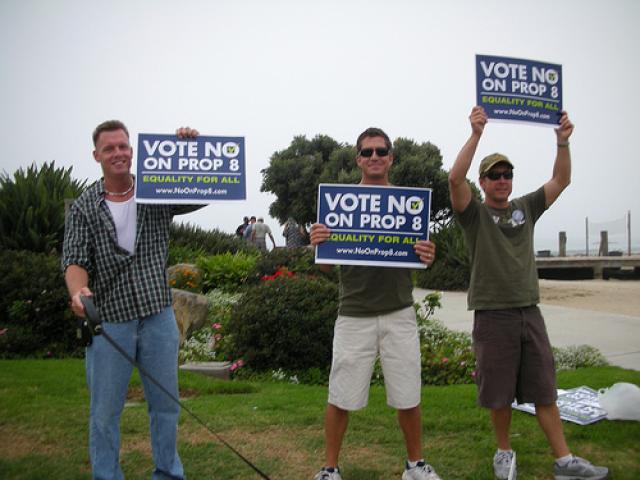 For those paying attention to United States politics, the major thing going on is the 2008 United States Presidential Elections between Democratic nominee Senator Barack Obama of Illinois and GOP nominee Senator John McCain of Arizona. For those that keep up with politics and California and events that affect the LGBT community, there is the heated Proposition 8 campaign.

Should Proposition 8 pass on Election Day, a ban on same-sex marriage will be in place for the California State Constitution. It was back in June that same-sex marriages were legalized. But, there are plenty of people that are not happy about it.

Interestingly enough, Proposition 8 has been one of the most heated campaigns. Proponents and opponents of Proposition 8 have poured in millions of dollars respectfully.

So far, it seems that supporters of Proposition 8 have taken upon themselves to threaten businesses that give their opposition. One such business leader to receive such a letter is Jim Abbot of Abbot & Associates.

“This type of outrageous scare tactic from Prop 8 is intolerable. As a business owner, practicing Catholic, and civic leader who has served on the EQCA board for nearly three years, I believe in equality and rights for all…especially for my employees, 25 percent of whom are LGBT.”

So far, the letter looks to be certified. It can be read online via the PDF format .

In the beginning of the letter, the Proposition 8 Campaign writes that it represents the 61 percent of California voters that opposed same-sex marriage back in 2000.

While 61 percent may have opposed same-sex marriage back then, this is no longer the year 2000. This is now the year of 2008.

At the end of the letter the following names are present:

Ron Prentice, the campaign chairman of Yes on Prop 8.

Edward Dolejsi, the executive director of the California Catholic Conference.

So far, the letter seems to look legit.

Finally, one should ask this question: How many other businesses have received this letter?

Filed under: Politics, US
Share Tweet Pin G Plus Email
previous article: Intel to Promote Computer Literacy in Uttar Pradesh
next article: A ride to the moon