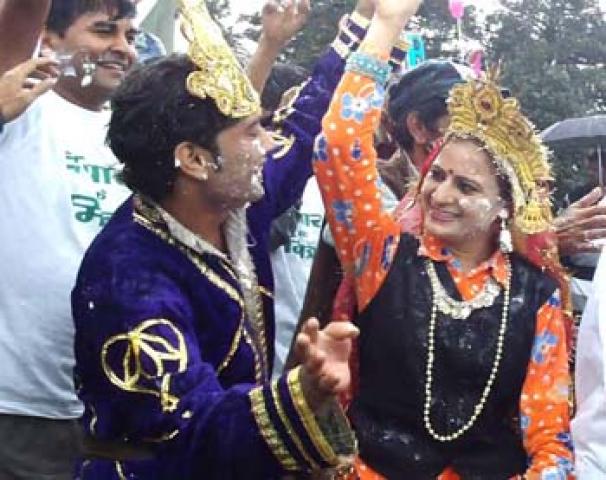 Andudi or Butter festival is a folk event that gives an insight into the life of the Shepherd community in India’s Uttarakhand state.

Folk festivals are often indicators of a community’s lifestyle, economic status and professions. A video report by Luxmi Nautyal, a mountain girl from Himalayan state of Uttarakhand, shows us how the butter festival reflects the sufferings and joys of thousands of local shepherds who have a tough life on the upper ridges of the mountain grazing cattle.

In remote districts of Uttarakhand life is full of hardship for thousands of shepherds who spend six months every year on high mountains, in makeshift huts isolated from their families.  The reason for this is unavailability of fodder for their cattle in the villages at the foothills. So they build huts on ‘Bugyal’ – grassland on mountain slopes – and stay there from early spring to early autumn. In these six months their cattle graze well and become fattened enough to fetch a good price at the market later. But the shepherds and their families stay separated with the shepherds also living a hard life in the makeshift hut with downpours of rain, strong wind and the fear of land slide or cloudburst.

The celebration of the butter festival marks of the end of this hardship. As the weather turns dry, the shepherds will now go down to their villages in the valley and later sell their cattle in the local market. Until next spring, they can be with their families. Luxmi who grew up among these folk traditions, feels the festival is a way for the entire shepherd community to express their joy at the occasion of their reunion. She felt that sharing information with others on traditions like Butter festival is not only important for anthropological reasons, but also to raise awareness among people about communities like the shepherds’ who otherwise stay invisible.

Luxmi has been giving us glimpses of the unknown mountain life in her videos for IndiaUnheard. To watch this video and more, click here.