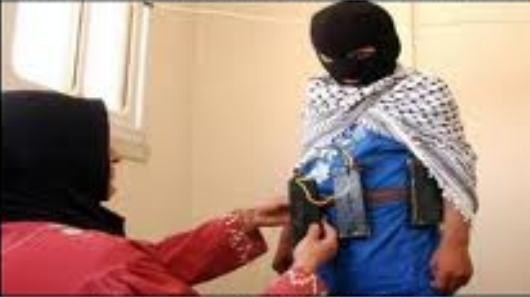 Taliban using children as suicide bombers – here a mum carefully outfits her child with a bomb in Palestine. Part of a suicide cult within Islam which is anti Quran. Promoted by jihadists and terrorists organizations including the Taliban…

Nobody want to kill a kid, especially American soldiers. “It goes against everything we stand for and believe”, said one soldier serving in Afghanistan…

The Taliban terrorists know this and are using children, some as young as 6 years old to carry bombs and act as spies.

This according to reports coming from Afghanistan:

“Young children are a security risk in Afghanistan”, says one US Army private, who refused to give his name out of fear of his commanders and officials at the Pentagon who have ordered him not to discuss certain matters with the press. “We don’t want to shoot kids, but we have no idea when they come running toward us if they may have explosives or not. This is a war where you have to expect the unexpected if you want to stay alive. Our officers are idiots who tell us to protect civilians even at our own expense. If we shoot one by accident or even in ‘self defense’ we could get in all sorts of trouble for it. I fear when I see the kids running towards us that one may have an IED strapped to their back. Most of the time they are half starved looking for a handout, treats or goodies, like a stick of gum, an MRE or a plastic water bottle…we just have to be on guard. We have heard reports that the kids may carry explosives and could be acting as spies to held the Taliban identify our unit and strength”, he said.

The children are being trained and ‘brainwashed’ by the Taliban. In some cases they are as young as 6 years old.

This is not unlike what Hamas and Hezbollah teaches children to do. It’s part of the suicide cult in Islam.

Using kids as bombers is nothing new according to some Vietnam era vets who say the Viet Cong used children all the time to kill American GI’s . “It is like a bad nightmare to think these young kids in Afghanistan have to deal with what we dealt with in Vietnam”, said Doc Simpson a homeless vet living in Charlotte, underneath a bridge. “If these boys are forced to kill a kid to protect themselves they will be haunted for life”, he said.

Suicide bombers are one thing, suicide kids are another. “It is just another thing we have to deal with”, said one young Marine currently serving in Afghanistan that requested we not use his name or unit in this report.

Filed under: News, Terrorism
Share Tweet Pin G Plus Email
previous article: Iran may have hundreds of Hezbollah operatives in the US
next article: Brothel near top secret base in Nevada poses a serious security concern