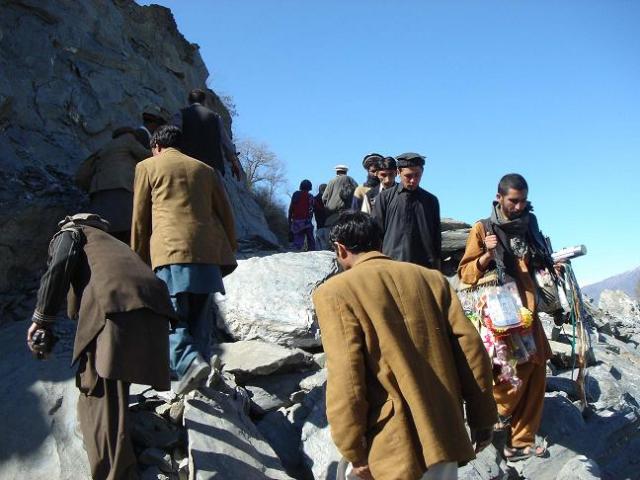 Contractor warned to stop work on Abdul Wali Khan By pass road due to no payment.

CHITRAL: Khan Abdul Wali Khan by pass road has been inaugurated by Chief Minister Khyber Pahton Khwa Amir Haider Khan Hoti on November 18, 2010 a 380 million project was tendered in November and work started in December 2010. Excavation work of rock cutting has been completed 80% but due to blocking of main road for traffic as well as for pedestrians and slow work causing nuisance for people of Chitral. As well some 700 lines of telephone (PTCL) also were broken during cutting the rock as a result 700 consumers remained deprived from telephone facility. The PTCL line was cut only by negligence of  C & W department (Communication and Works). When Assistant Business Manager of PTCL Bakht Baidar contacted he confirmed that due to negligence of C & W department our PTCL main cable of 700 lines have been damaged but we did not lodged FIR against XEN because he promised for payment of 2 million rupees to PTCL for replacing the damaged cable. Besides it debris of rock also lying on the main road and not removing for disposal causing great problems for pedestal and  traffic as this is main Airport, Hospital, Courts, Colleges and schools road. In this connection concern contractor was contacted regarding none removing of debris Arshad Shaheen of Shaheen Construction Company JV said that I had requested Executive Engineer of C &W time and again for payment but my bill of 15 million still pending and he paid me only 4 million against 15 million. He said that nothing was paid to us for mobilization of machinery and XEN Pir Muhammad creating hurdles in the way of this developmental project.
He said that concern SDO visited the site of retaining wall and expressed his satisfaction but alleged that XEN not allowing us to continue work and that is why the work is slow causing for delay of the project. He also told media men that according to drawing of C&W height of the rock (road side) have been shown 20 feet while actual height is 120 feet and they have shown its width 9 feet but actual width on the spot is 35 feet and C&W paid a huge amount to consultant for a wrong drawing. He said that the concern department was using different tactics in hand over of work order. A mechanic Said Rehman told that I am contractor of labors but we are waiting for the last 25 days and XEN Pir Muhammad not giving us drawing for retaining wall on river side to star work. It was also revealed that one employee of C&W has taken rupees 240000 from the concern contractor ( as bribe/commission) though an open cheque  which was also confirmed by Manager Allied Bank Chitral Irshal Ali that a sum of Rs. 240000 has been cashed /drawn from account No 653-0 of Arshad Shaheen on 5th April 2011 cheque  has issued on 6.11.2010  drawn by the brother of head clerk of C &W and we also collected his computerized national identity Card copy for bank record. On other side Arshad Shaheen alleged that I had informed Bank Manger to block my account and nothing be paid to any person but even than he paid huge amount from my account. In this connection when this scribe contacted Executive Engineer C&W Pir Muhammad that the amount received by your employee is legal or illegal and why the contractor was not bound to remove debris from main road  he refused from any response and treated with a very  inhuman and misbehave attitude. While on the  other hand due to wrong planning of C&W department there are so many turns in by pass road which is harmful and dangerous for smooth traffic. Source told that he is supporting by ANP led government and that is why his staff are very bold in getting commission and bribe from contractor. Social and political circle of Chitral have demanded from Chief Minister KP for releasing fund for this long awaited project of By pass road as well as they demanded action against the concern quarter for creating hurdles and delay tactics in this mega project.
G.H. Farooqi PO Box No. 50 GPO Chitral Pakistan or Bank Islami main branch Chitral.
Telephone No. 0092 3025989602, 03337069572, 03469002167, 03159698446, 0943302295, 0943316952, 0943414418
Email: gulhamad@gmail.com
Filed under: Music & Film, World
Share Tweet Pin G Plus Email
previous article: JK Police Chief reviews security situation
next article: American Movie “Acting”