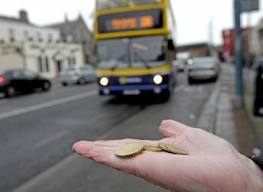 he Cabinet has approved a 7% price hike of Private Bus fares with effect from 01st Of November this year.the cabinet paper on price hike of private bus fares which was submitted to the cabinet recently has received the approval according to Minister of Private Transport Services C.B Ratnayake.

Meanwhile trade unions representing private bus owners have expressed their opposition for the proposed 7% price hike by stating that government should have increased private bus fares by more then this.the president of Lanka Private Bus Owners Association Gamunu Wijeratne has said that the authorities still not been informed them on the new price hike of bus fares. however the proposed 7% hike was requested by them on last February and it should be increased more then this by now he has said.there may be a price increase of Diesel behind the increase of bus fares he has stressed.

The association’s director board will meet tomorrow(13) to discuss on the matter the president of Lanka Private Bus Owners Association has revealed.

Filed under: News, Opinion
Share Tweet Pin G Plus Email
previous article: How Peter Higgs discovered he had the Nobel Prize ?
next article: Her Beauty Overwhelms The Core Of His Spirit