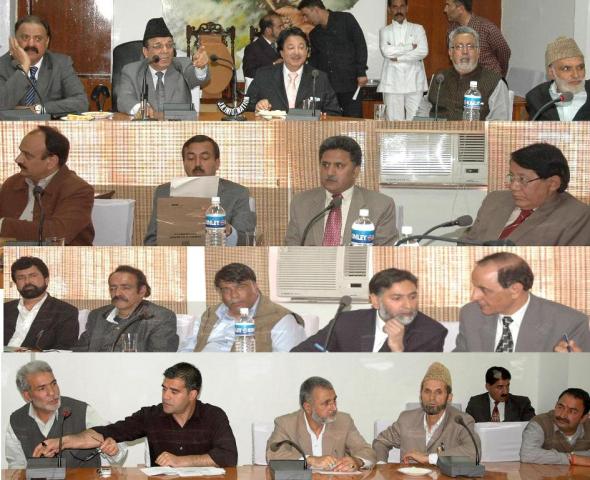 Srinagar,May 15 (Scoop News) –The Cabinet Sub-Committee met here this evening under the chairmanship of Minister for Finance  Abdul Rahim Rather to hold fresh round of talks with the representatives of employees over their residual demands.

After threadbare discussion, Finance Minister gave the brief of the decision taken in the meeting to resolve the pending demands of the employees.

Regarding the release of dearness allowance,  Rather said that it was decided that orders for release of 8% DA will be issued soon. He said that long pending demand of PSU employees has been solved by conversion of COLA into DA and will be effected from 1st July 2010.

To remove the pay anomalies,  Rather said that the pay anomaly committee shall submit its report to the Government by the end of June this year for taking further action in this regard.

Regarding release of 6th Pay Commission arrears, Finance Minister said that the assurances given by the Chief Minister will be adhered strictly and road map for the release of arrears will be accordingly prepared within three months on the basis of which appropriate decisions will be taken. For acquiring the full pension benefits, the Committee has decided to reduce the qualifying services from 30 years to 28 years,  Rather added. For the regularization of daily wagers, the Cabinet Sub-Committee already framed shall submit its report to the cabinet within six months.

The Finance Minister also announced the release of salaries in favour of the employees for the striking period and the period shall be considered as leave what-so-ever due to them as one time exception. He said the process will be initiated to look into the cases of those employees against whom action was taken under ESMA and a positive and lenient view shall be taken after following the due process of law.

Rather said that the Government has always been  employee-friendly and has taken several measures including implementation of  6th Pay Commission due to which State ex-chequer has to face burden of Rs 1800 crore.

He thanked all the participants for achieving a successful solution to the problems of the employees. He also thanked media for presenting the Government view point in real prospective every time.