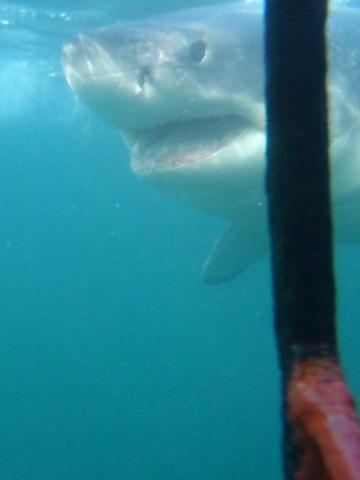 The stink of chum made of fermented tuna and anchovy oil combines with pungent wafts of excrement from the seal colony that the boat is anchored next to.

Heather sits on the top deck of the 40 foot shark cat, blissfully impervious to the nausea stimuli around her, recording data on the sharks around the boat.

Other volunteers are seasick throwing up.

My friend’s idea of a holiday is not what I call fun.

If I went to South Africa I’d be surfing the lineup in Durban, not going green on a cage diving boat two hours south of Capetown, so sharks could check me out.

Heather seems to think that Great White sharks aren’t the cold blooded killers that the movies tell us they are. I look at her with disbelief as she says felt no fear when they swam around her.

Of course its not just movies that are responsible for the fear. Reading about Great White attacks on surfers at Phillip Island and Western Australia hardly puts me at ease. Nor did the news of the boogie board rider who got bitten at Mermaid Beach this year.

It’s not like a have an opinion. It’s just that as a surfer I choose not to think about sharks because I know they are around.

“Owing to massive negative media publicity over the years, sharks have become one of the most maligned, misunderstood, even hated species on our fragile planet,” the Great White Shark Project website says.

Being a journalist, after speaking with Heather Anderson (also a journalist) about her two week volunteer stint with the South African shark conservation NGO, I would have to admit that the media could be responsible for some stigma and discrimination when it comes to sharks

The Great White Shark Project runs out of a one-shop village called Kleinbaai near Cape Town. The project, which is about re-educating people about sharks, depends on volunteers to help record data that is then used by the South African Shark Conservancy.

Great whites have got the highest level of protection in South Africa.

A multitude of cage diving operations head out from Kleinbaai about six miles to Geyser Island cape fur seal colony to meet great whites. A lot of the companies provide tourists with a big fat hit of adrenaline experience.

Watching these ultimate predators breach to catch bait towed behind the boat adds that “wow” factor for the tourists.

Heather says the project she volunteered for is totally not about that. On the contrary the volunteers are encouraged to focus on other non-threatening aspects of behaviour.

“On the first day they[ the great whites] are all the same, but by the end of the two weeks we could recognise individuals,” she says.

"They do this gaping behaviour – open and close their mouth to show you who is the boss. They are really smart, very strategic, – they conserve energy.”

“The sharks spyhop – put their heads out of the water to see the seals on the rocks. Sharks breach. That’s how they get the seals. They ambush them from below."

I’m not so convinced though, when she says I don’t need to worry about them eating me.

"Humans don’t have enough fat –they spit them out, they eat seals and whales.

“I loved them. I felt they were like big dogs who weren’t trying to get us, four metres was the biggest,” she smiles

I think how cute.

The most dangerous part of cage diving is when the volunteers climb out of the boat to get on top of the cage, so they can get in.

“Getting into the cage you are totally exposed, with sharks swimming around. I never felt scared, it was bizarre,” she says.

She shows me some photos of an unfortunate seal who stupidly swam into the cage and got pinned in there by sharks. I feel a strong sense of empathy with the seal.

“He probably got eaten,” she says.

It’s no surprise to me that there is strong opposition to cage diving in South Africa.

The objection is based on the perceived threat to surfers and divers. They argue that the chumming and bait attracts sharks and also creates a shark association between food and humans.

“Deaths caused by shark attacks in the Western Cape have tripled in the 20 years since caged shark diving became a commercial enterprise,” a South African newspaper, The Weekend Argus, reported,

But Heather disagrees with the statistics and adds, “I don’t understand the food association. It is the boat that is chumming.

Mmmm. I think… No more left-over-from-the-night-before cold pizza with anchovies for breakfast before my morning surfs on the Gold Coast.

Clik here to see an interview with Heather