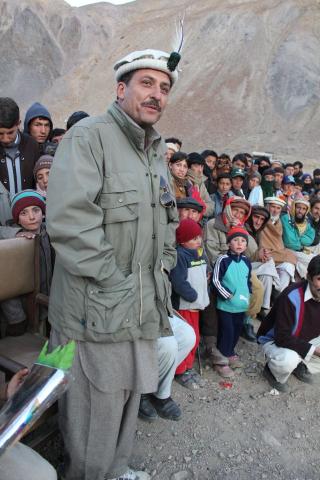 CHITRAL:  15th Chanchori Cricket Tournamentwas concluded on Friday, today here in Pachili Ground, Kosht, northern Chitral. The event participated by 85 cricket teams from all over subdivision Mastuj.
The final was played between Murder Cricket Club (MCC) and Kuragh Cricket Team (KCT) while the latter lifted the cup.
In his welcome speech, M. Yaqoob, the organizer of the event, admired the services that Shahzada Sikader-ul-Mulk former Tehsil Nazim  render in the field of polo in addition to being an efficient Nazim.
Sikander-ul-Mulk—Chairman Chitral Association for Mountain Areas Tourism  (CAMAT) and Jashan-e-Qaqlasht Committee—was the guest of honor on the occasion, who distributed cups, medal and cash prizes amongst the players. he said that sports play cardinal role in the promotion of a healthy society and hence it must be the responsibility of elder and political leadership to groom youngsters through sporting events. He said that youths have to assume future leadership and hence it would be important to promote worthwhile values—tolerance and sportsman spirit—in their character and behavior through frequent and well organized sporting event.
He said that the wave of change seems to have swept across the country and the time seems to be rife for youngsters to show their potential in the changing political landscape of the country.
G.H. Farooqi PO Box No. 50 GPO Chitral or Bank Islami Main Branch Chitral
Telephone NO 0092 3025989602, 03469002167, 03337069572, 03159698446, 0943-320737, 0943-316052, 0943-414418
Email: gulhamad@gmail.com
Filed under: Sports, World
Share Tweet Pin G Plus Email
previous article: Producer’s Pseudo Offer To Amanda Knox Nothing More Than A Publicity Stunt
next article: JK CM personally monitors restoration work in Srinagar