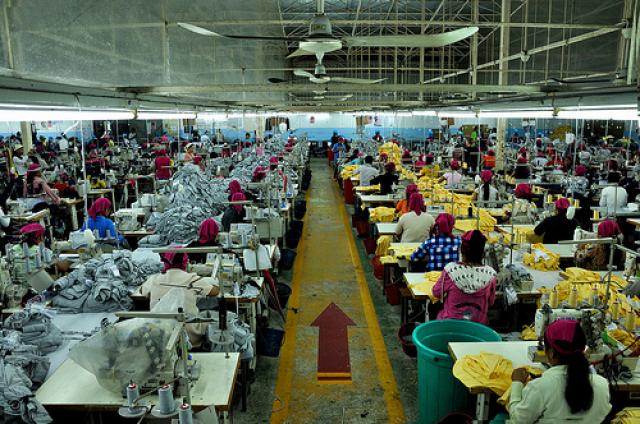 The Asia Floor Wage network is organizing Cambodia’s first ever People’s Tribunal [1] on Minimum Living Wage and Decent Working Conditions for garment workers. The tribunal is scheduled on February 8, 2012, in Phnom Penh:

The garment industry [2] in Cambodia represents 90% of all exports. However, despite its relative economic importance, workers receive only half of what is needed to safely support their families and the statutory minimum wage is currently the lowest in the Mekong region.

One of the major issues which will be discussed is the poor working conditions [3] in factories which resulted in fainting incidents [4] in numerous workplaces:

Another issue of concern currently facing garment factories and their workers has been mass fainting [5]. In 2011 year alone, the Free Trade Union has reported some 2,300 workers fainting in 5 Cambodian factories… Investigations and company statements have varied in their conclusions on contributing factors, but many have highlighted physiological causes such as low blood sugar, malnutrition, dehydration, food poisoning and over-exertion.

In the same year, King First Industrial confirmed their list of major customers and customer base to include:

Despite the gargantuan profits being reaped by Cambodian garment factories, their parent companies and international buyers alike, King First Industrial Co. Ltd seems unable to provide their workers with a safe and healthful working environment. Contraventions of occupational health and safety expectations are interrelated to the pitiful wages that these workers receive.

Management and workers indicated that for the period March 27 to April 9, workers completed four hours of overtime on weekdays as well as on March 25, April 1, and April 8. Workers on the second floor indicated they felt compelled to work all night starting at 7 a.m. on Friday morning and finishing at 7 a.m. on Saturday morning. They also indicated they worked on Sunday 27 and April 3. Workers on the first and fifth floor did not work overnight but did work four hours of overtime on weekdays and Saturdays and Sundays.

LTO Cambodia thinks the mass faintings could be a case of mass hysteria [11]:

The mass fainting are, for lack of a better term, ‘mass-hysteria,’ but by that I don’t mean to diminish their significance. These factory workers are largely poor young women, often country girls, working in gray, stuffy, unpleasant conditions, homesick, pressured by family and harsh supervisors and doing mind-numbingly repetitive work for very little money (averaging $55-$61/month,) often for long hours.

Aside from the fainting issue, the tribunal hopes to address the complaints raised by 200,000 garment workers in Cambodia who went on strike last year. Below are the other goals [13] of the tribunal:

A petition [14] was initiated urging H&M clothing company to join the tribunal:

H&M decided when cotton prices rose during 2010 and 2011 that they would kindly cover the costs so their customers wouldn’t suffer higher prices. Unfortunately, the courtesy doesn’t extend to their suppliers working in Cambodian garment factories, 90% of whom are women.