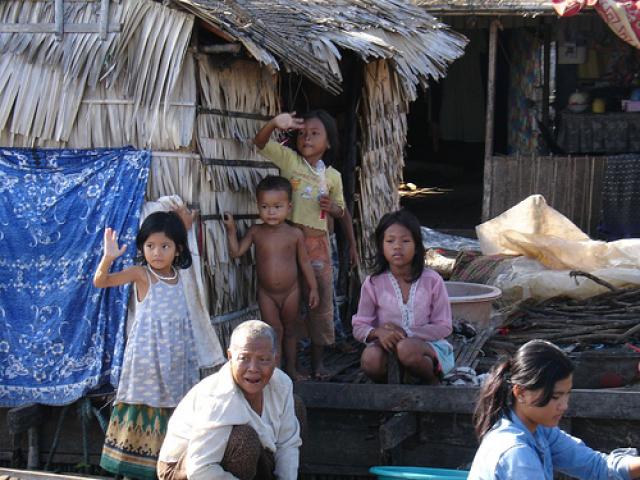 For many in the village of Mondul 3 in Siem Reap Cambodia poverty is a way of life, for Sov Soparath this poverty ended in tragedy. Sov and friends caught and ate brown frogs after a heavy rain, 2 hours later Sov was dead and his brother was in critical condition at Kantha Bopha Children’s Hospital. Two other children and three adults were also treated at Siem Reap Provincial Hospital and recovered.

Sov’s family could not afford the price of a funeral or a coffin, he was laid to rest in a coffin made from a wooden table. The News Hope Community center paid $250 for the funeral and held an email fundraiser for the family, they raised over $1000. They plan to use the money to restore the families home that is in need of major repairs, they also plan to pay for an education for Sov’s younger brother.

Kerry Huntly, director of the community centers told the Phnom Penh Post that this is not the first time someone has been poisoned by eating frogs:

"About three months ago, two little army girls, one 3-year-old and one 5-year-old, caught a frog … grilled it, ate it and were severely sick. At one stage, the younger girl was not expected to survive, but she pulled through."

"This is what happens when you have poverty like this. This lot here don’t have a choice when it comes to food, and they’ll eat anything. They also eat ants that sometimes make them sick."

According to New Hope 78 percent of the people in Siem Riep earn less than $2 per day, 45% of the children 5 years old and younger suffer from malnutrition, many children survive on rice water, salt and the frogs and ants they catch. Mothers who are to malnourished to produce breast milk will sometimes be forced to feed their babies rice water. In many cases the family may be forced to give their children away to someone that can provide a better life for them.

Sov’s homemade coffin was carried through the streets on a cart before the funeral to warn others about the dangers of eating the poisonous frogs.