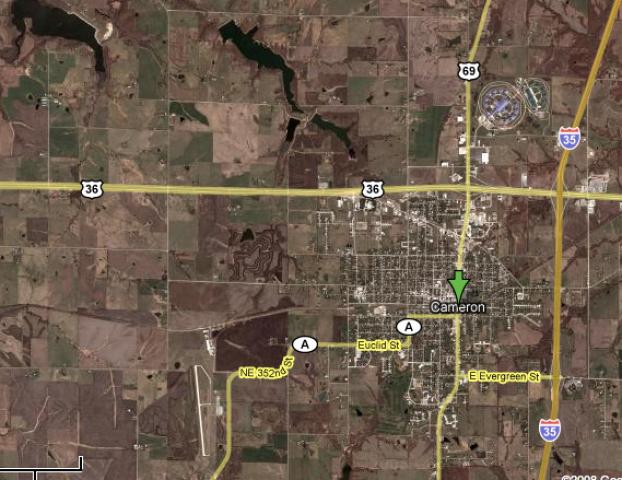 FOX News and KMBC are reporting today that a bizarre flurry of brain tumors in the tiny Missouri town of Cameron have officials looking for causes.  The local pharmacist, Steve Erickson, said he realized something was wrong when over a dozen residents were diagnosed with brain tumors in the past seven months.  Cameron, Missouri has a population of 6,500.

Now the water source, "the only thing residents have in common", is being investigated by the Centers for Disease Control and Prevention and the Department of Natural Resources.

But is the news such a surprise?

Online searches turn up a multitude of references to dangers of drinking water in Cameron, Missouri.

First, independent contractor MEC Water Services cites Cameron, Missouri as a case study in how to manage watershed pollution. The study there found that:

"water quality had been detrimentally impacted by the non-point source pollution sources within the watershed. Such water supplies typically produce taste and odor problems and elevated production of disinfection by-products."

Cameron’s economic history reveals a lot of manufacturing background, including an insulation factory owned by Rockwell Insulation in the 1960s. It had a 130,000 square foot plant in the town.

MEC Water Services implemented their solutions to the problem in 1998, citing that odor and bad taste were gone, algae disappeared, and other positive indicators were present.  But they added ominously that "[t]ime will tell whether these water quality improvements will be realized for the years to come."

Townhall records show that Cameron officially decided to use treated  water from the American Water Company in St. Joseph, Missouri, as a result of droughts that reduced water supply.

At present, it appears that several water sources, including "Lake  3" and the local Grindstone Reservoir, are at capacity.  Adding to the complications is the presence of two large prisons in Cameron, Missouri, which means that demand rises every year as the prisons are filled.  The prisons play an important economic role in Cameron. For a presentation on the Cameron reservoirs, download here.

The possible culprit?  A combination of rain-transported pollution and an overloaded waste treatment plant, combined with a soaring demand, have stretched Cameron resources to the brink and created a deadly scenario.