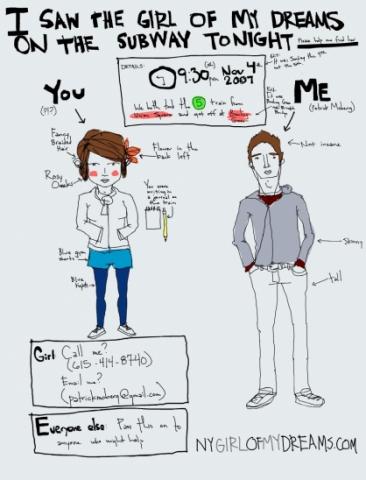 Last winter, Patrick Moberg, 21, used the internet to his advantage in a novel idea that actually worked. He created a website called www.nygirlofmydreams.com to track down a woman he became enamored with on a New York City subway. Less than 48 hours after posting a sketch of the woman in question and where he saw her on his Web site, one of Camille Hayton’s friends told her she was being searched for.

Camille Hayton, 23, and Patrick Moberg met and began dating in what some called a "modern day fairy tale." Their relationship and www.nygirlofmydreams.com received international attention and garnered the couple TV appearances.

Unfortunately, the public learned today that Camille Hayton and Patrick Moberg have broken off their relationship. Hayton, who is Australian, told Australia’s "The Sunday Telegraph" that the pair is now "just friends." She explained that she wanted to give a relationship a try so in the future she wouldn’t "wonder what if, what if?"