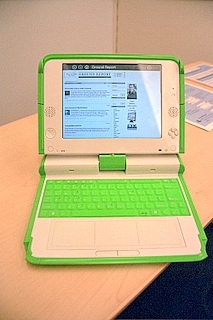 It was easy to spot the most popular kid at last week’s “Open Source Meets Business” conference in Nuremberg. Between presentations, in the halls, even at the lavish evening banquets, there he’d be, flitting around in a cherry fedora, showing off the coolest toy in town, if not the world. Jan Wildeboer is a Solution Architect at software company Red Hat-hence his distinctive headgear-and in a testament to his problem-solving talent, he had managed to get hold of the prototype of an OLPC, a $100 laptop designed to save the world.

OLPC stands for One Laptop Per Child, and was developed through an initiative led by Nicholas Negroponte, and backed by some of the most powerful names in technology, at the Massachusetts Institute of Technology. Released a month ago to an elite group of influencers in technology and government, there are just 800 prototypes on the planet. “And only three in Germany,” Mr. Wildeboer gleefully inform his audience. He is a salient but unlikely evangelist. Mr. Wildeboer is hawking a product designed for children, though the conference, organized by German technology publishing powerhouse Heise, attracted a decidedly grown-up group of programmers, entrepreneurs and investors. Furthermore, you can’t buy it.

If the reaction at the conference is any indicator, it will be hard to deliver that news to would-be consumers. But retailing the OLPC is antithetical to the project’s purpose, at least right now. According to OLPC’s website laptop.org, the notebook computer was designed to help kids six years and older in developing countries “explore, experiment and express themselves.” Decrying the fact that two billion children in the world are inadequately educated, the OLPC is meant to give children powerful learning tools. As Negroponte asserts, “it’s an education project, not a laptop project.”

Right now only government agencies can buy OLPCs, and the minimum order is one million units. Mr. Wildeboer says OLPC needs contracts for 22 million pieces to bring production costs down to $100 per computer. With agreements from Rwanda, Libya, Brazil and Argentina committing to a total of eight million laptops, the goal is certainly within reach.

So what does the OLPC offer, and how can it cost so little?

First off, the OLPC is more about doing than storing. To their child users, there are no file directories or folders on the OLPC. The emphasis is on the programs, on playing, exploring and sharing with friends. When a young girl turns on her OLPC, she is greeted by "sugar," a user environment that represents her as a stylized stick figure in the center of the screen. A ring of icons showing applications in use surrounds her digital persona. If she wants to start new activities, she moves her pointer to the edge of the screen, prompting "The Frame" to appear. Instead of a mouse there is a touch pad, which can also be used with a stylus for penmanship practice.

The OLPC runs entirely on Open Source technology, a type of free software created as an alternative to more expensive proprietary programs like Microsoft Windows. Using Open Source software helps keep costs low and enable children to modify machines. The OLPC’s operating system is an energy-conserving version of Red Hat’s Fedora in which CPU turns off when the monitor is not in use. The program suite includes an internet browser, Abiword writing program and video program for use with the embedded video camera. There is messaging and a Voice-Over IP application for real, live talking. To cultivate creativity, OLPC worked with an artists’ collective to develop Tom Tom, which helps children compose music using an array of instruments, animal sounds and customized beats.

The program offerings are a good foundation. But designing a computer for regions that often lack electricity and an internet connection introduces a tricky set of challenges. Thus the OLPC runs on just three watts of electricity, and has a battery life of eight hours. Initially they wanted to install a crank for kids to turn when their laptops ran out of power, but the physical design wasn’t viable. OLPC ultimately decided to implement a foot pedal in the style of old-fashioned sewing machines that children will use to power their machines. In addition, they have developed a yo-yo that will fuel the computer for one hour after ten minutes of play.

And then there is the ubiquitous challenge of building a sophisticated machine for a rambunctious seven-year-old. The OLPC had to be durable enough to withstand the energetic handling of a child. To deal with wear and tear, the laptop will be encased in a thin layer of rubber and has no moving parts. When closed, it is nearly waterproof, in case its owner must traipse to school through a downpour. The keyboard is designed for child-sized hands, and the Lilliputian laptop is 9.5 inches long, 9 inches wide and 1.2 inches thick. The computer can be enjoyed in either ‘eBook’ or tablet mode thanks to an ingenious swiveling and locking display. A cutout ergonomic handle lets youngsters lug it around easily.

Thankfully, practical considerations have not detracted from the quality of the technology. The screen has a 1200×900, 200 DPI resolution that bests 95% of laptops on the market, and can be switched to a “transflective” mode that enables reading in direct sunlight.

But the most groundbreaking and potentially world-saving feature is the wireless mesh networking technology that connects the computers. The IEEE 802.11 networking technology enables a laptop to recognize any other laptop within a one-mile range and share access to its internet connection. This means that if just one laptop is connected to the internet, thousands of OLPCs within range can gain internet access. With Voice-Over IP technology, this will effectively create an instant telephone network without any external infrastructure at all.

While the telecoms may not be fans, this could revolutionize communications in developing countries quickly and at nearly no cost. Add to the equation internet applications that help people to share content, and the OLPC could be on track to revolutionize the media. Imagine how news coverage would be transformed if 22 million children in developing nations could self-publish on news portal GroundReport.com.

Debate is already churning as to whether OLPCs can be kept off the black market, or whether giving out laptops is the best way to address social and economic issues in the world’s poorest countries. Bill Gates has publicly criticized the project, and now wants Windows put on the machines. And Intel has introduced a rival though far less sleek prototype.

Yet as Mr. Wildeboer crusades among the crowds, skepticism is absent. Instead, awe is the norm as he vaults smoothly through his demonstration with the skill of a circus acrobat. Onlookers, including this reporter, find themselves embarrassed by their own fanatical reaction. Not to worry, insists Mr. Wildeboer as he turns from the display to look his audience in the eye, “for many people, seeing the OLPC for the first time is an emotional experience.” Time will tell if the adulation is deserved.

Filed under: Media & Tech
Share Tweet Pin G Plus Email
previous article: The Dobbs Ferry (Pharmacy) Party Strikes Back !
next article: …and the times they are a changin: A Eurosceptic accepting the Euro