My fellow was not much at talking when I met him 11 years ago.  He had been bullied by his wife of 36 years and kept his comments to a minimum.  He was an engineer and sworn to secrecy for much of his career; so communicating was not his forte. 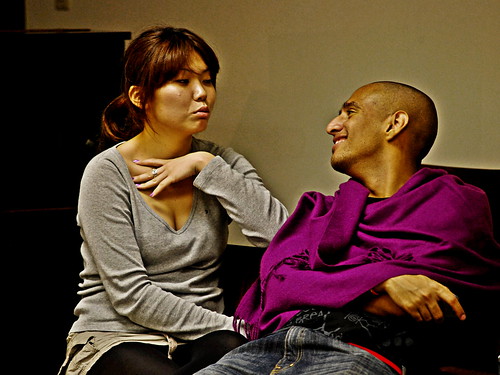 However, I learned after my domestic violence prone marriage that there is no perfect marriage.  Moreover, I learned not to marry a person because they are a good dancer or conversationalist; and  this was important information for me.  I can dance with  fellows but I do not have to marry them, if there are other qualities that are not in my best interest.  I accepted that we would not have those great talks.

I had to pick the qualities most important to me in my partner. Learning that I would have to grow into those qualities I wanted in my mate was significant.  I would then be able to find someone with those traits too, using the Law of Attraction.   I decided that honesty, sincerity, loyalty, integrity, and spirituality were my values, I would want in my mate.

Early in our relationship, I tried to share some intimate information about my past, and he did not understand as he had a healthier childhood. I decided to find a person, another woman who I could really talk things out with instead of my fellow.   Therefore, I found my new female friend was the perfect person to have those long talks that are necessary for feedback, as a sounding board and just to chat.

I expressed myself in the daily communications needed to go on dates, dinner, and kept my mouth shut on deeper topics.  We became involved with book study groups on spirituality and grew closer together.  He found that I was a safe person with whom to talk and we began having small conversations on the phone or in the car, which seemed safer.  I found that I could share my feelings and he accepted them, he slowly shared his needs.  Our relationship was evolving into a trusting one beyond our meager beginnings.

Through our personal growing and sharing meditations our communications began to expand.  As he felt safe to open up and share his confidences, I became a safe person to talk to, accepting whatever he said.

There were a few times, I did not like what he said.  After a short time of anger, I had to admit he had the right to say it.  One comment was he would never remarry.  After my fuming to myself about this, I now know this was the wisest way for our relationship to improve. It has given us each our own space and a comfortable, loving companionship for trips, plays, golf, and spiritual activities that we love to do together. Neither of us feels tied down, or smothered. I actually have found I like my independence but togetherness.

Gradually, I noticed that he was opening up more than ever before.  I was overjoyed.  Then this week, he could hardly wait to tell me about his meditation he just had in the hot tub. He was so excited; he woke me up to share it.  His news was exciting to him. I was thrilled he trusted me and felt completely safe to be so vulnerable. His excitement that he could not wait to tell me everything, felt wonderful.

We totally trust each other today.  Building that trust has created a relationship I only dreamed of years ago.  I am in a growing, safe, and secure relationship which has evolved over 11 years.  It did not happen right up front.  I had to grow as much as he did.